Mother of two Fiona Orrell from Lancashire is almost halfway through a year-long adventure walking one section of the Coast-to-Coast trail every month with her husband. After a tough year, walking has been like therapy for her.

Why I love walking

“I’ve always been active and adventurous, and did a lot of travelling when I was younger, but I was a single parent before meeting my husband, so had put my adventures on the back burner for a while. Twelve months ago I was juggling full-time work and looking after my two children, when my mum had a severe stroke which left her disabled and unable to speak. It was a really tough time for all the family, and so I made the decision to become her part-time carer. This past year has really taken its toll, and you have to somehow find a coping mechanism… whatever that may be for you.

“I started taking little walks out during school hours for some light relief, and it made me feel so much better. It was just what I needed at that point in my life. So over Christmas my husband and I set ourselves a challenge – walking the 192 mile Coast-to-Coast trail one section at a time. 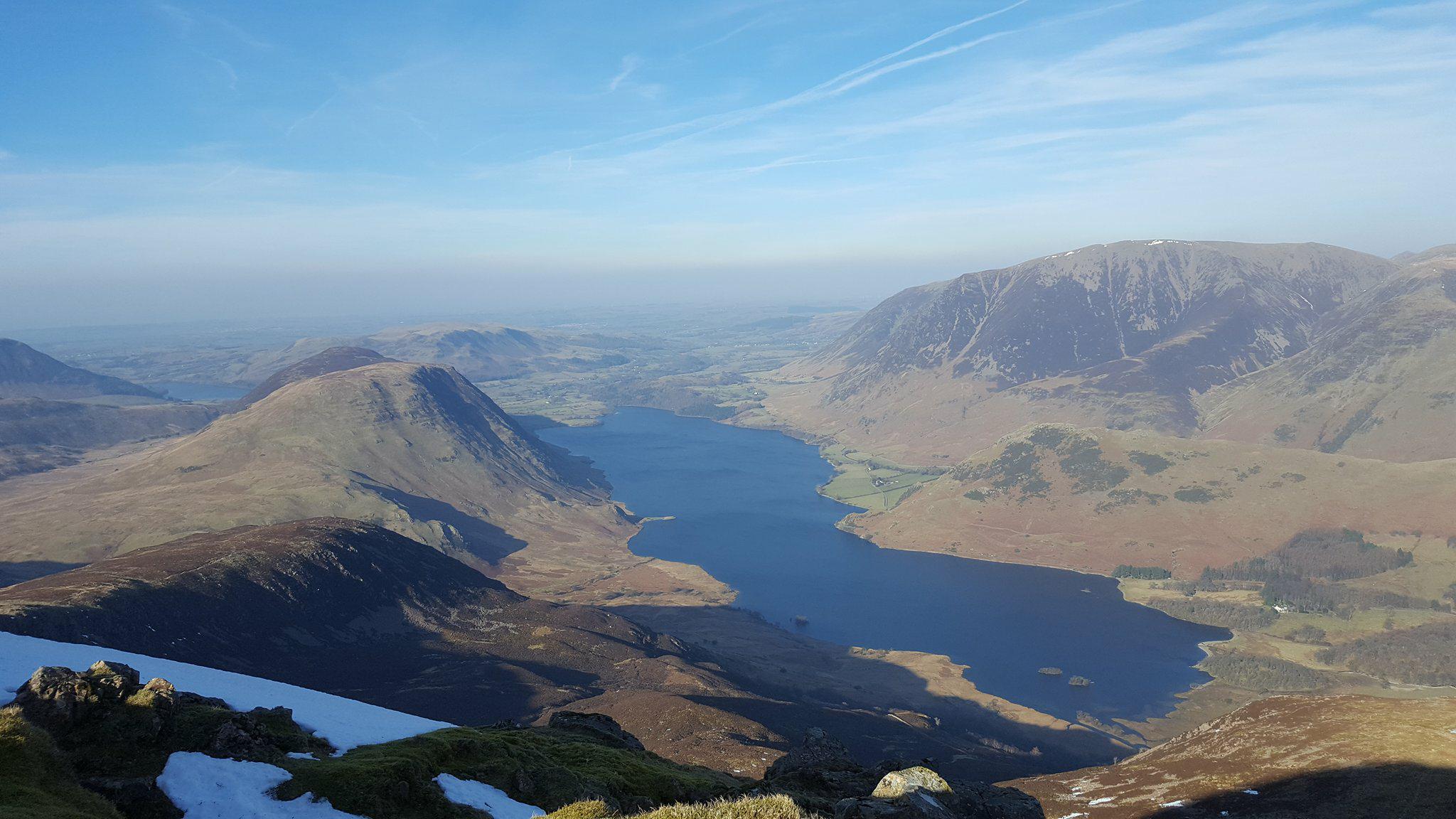 The view from Red Pike looking back over Ennerdale Water

How I fit walking in around family commitments

“Being a mother and also having commitments with my mum means full-on adventure just isn’t an option for me at the moment. Breaking this challenge down into manageable chunks to fit around my family means I get to still be adventurous, and continue walking, which had grown into a passion and an outlet for me. I have two children, a 13-year-old son and seven year-old daughter. We take them camping as often as possible, and they try various adventurous activities like bouldering, but they weren’t keen to do this. Many parts of the route are a just too tough for them too. We have plans to include our daughter in the next shorter section of the walk, which should be more manageable in the Summer temperatures, but my teenage son isn’t too keen! It’s a little more tricky at that age as they prefer to do stuff with their friends.

“It’s also great that I’m completing the challenge with my husband. Walking like this each month gives us a chance to have some time to ourselves. When you’ve got children, it’s so hard to carve out any space for yourselves. It’s been lovely to have this day a month to do that. Making time for yourselves is so important – especially so when you have many family commitments. My husband first got into walking last year, when he was asked to take part in the Three Peaks Challenge with a group of friends for charity. He loves it!

Our coast-to-coast walk so far

” The Coast-to-Coast trail (often known as Wainright’s coast to coast) is a challenging but beautiful route near me that runs from St Bees to Robin Hood’s Bay. It passes through the Lake District, Yorkshire Dales and the North York Moors. We ask a family member to look after the children one day each month and set off the evening of the day before. We drop one car off at the end point of a section, then drive to the start of the section and either sleep in our van or at a Youth Hostel nearby. Then once we’ve finished we go and collect the first vehicle.

“In January we walked 14 miles from St Bees to Ennerdale Bridge. The weather conditions weren’t ideal and probably why not many people walk the Coast-to-Coast at that time of year! When we tried to dip our feet in the water at St Bees, the waves were crashing in and we almost got completely drenched before we started our walk. Apart from the weather the walk went smoothly.

“February we walked 14 miles from Ennerdale Bridge to Rosthwaite. This was certainly one of the most challenging sections for us (so far). As our first walk had gone so smoothly we were a little over confident, and also a couple of hours delayed setting off in the morning. We decided to take the high alternative route and go up to the summit of Red Pike (2,476ft). Although the height was achievable it was an incredibly steep, relentless climb to the top. The trek up was completely worth it though. The views at the top over Buttermere and beyond were breathtaking. We continued along the top of a ridge of mountains, taking in High Stile, the highest at 2,647ft, and High Crag before descending. The decent was impossibly steep at times, which slowed us down and I was conscious that we were running out of daylight, given our late start. By late afternoon we were still faced with climbing Haystacks which was around 2,000ft and we were exhausted! 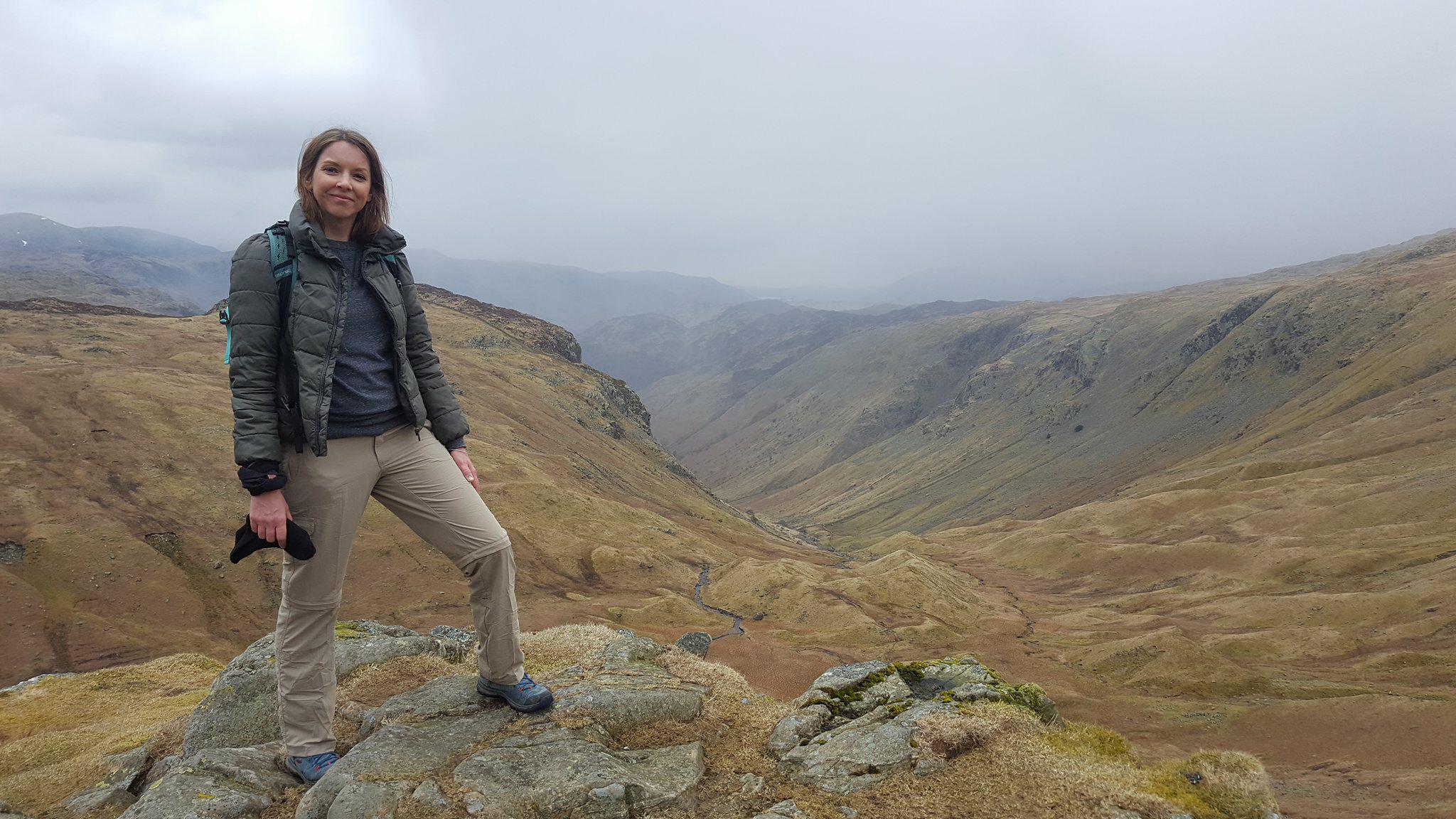 “Earlier that day we had already witnessed Mountain Rescue called out to someone, so we made the decision to take what we thought would be a safer route, complete our final descent and head to the nearest road. We considered that if we lost daylight altogether we may regain a phone signal and could call a taxi once on lower ground. How wrong were we?! In choosing this route we had added another couple of miles on to our journey and were now faced with climbing Honister Pass, still without phone signal, exhausted and with daylight fading fast.

“At the top of Honister Pass we headed in the dark first to the slate mine and then to the youth hostel, hoping to find someone with a phone. Luck was not on our side, so we had no choice but to continue on. We had re-joined the original route and had about three miles to go (all downhill) so we ran most of the way. Our knees were ready to give way at the end. I can’t tell you how glad we were to get to Rosthwaite, but it had been such an amazing adventure for us. Since that walk we made the decision to never set-out without our head torches again!

“In March we hiked 18 miles from Rosthwaite to Patterdale. After running out of daylight on the last section we decided to walk this section over two days, giving ourselves extra time to walk the high alternative routes if the weather allowed it. The first day went fairly smoothly. We took the high ridge route, taking in three mini peaks – Calf Cragg, Gibson Knott and Helm Crag. It’s definitely worth going high if you can as the views down the valley are incredible, although the decent into Grasmere is steep and tough at times. 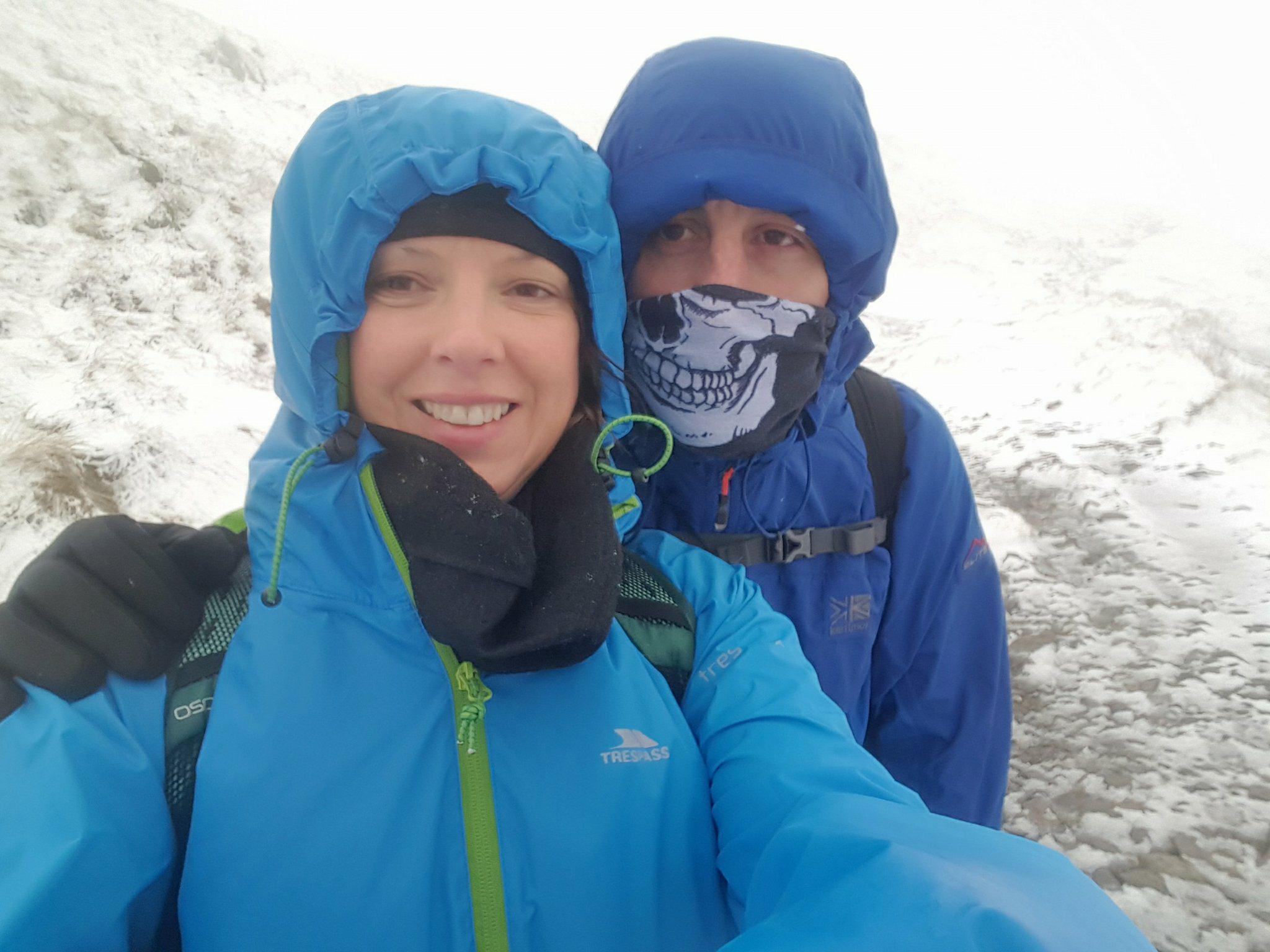 Fiona and Rob at Grizedale Tarn

“We were hoping to take in Helvellyn on day two. However we were advised by a local that the weather conditions were too dangerous, so it wasn’t meant to be. It was snowing when we set off and the mountains were snowcapped so we decided to follow the original route over Grizedale Pass. This was a tough climb mainly due to the weather conditions. The wind was bitterly cold and the snow fell heavier the higher we climbed. We passed a woman on her decent who was on the same route as us but coming from Patterdale. Once we lost sight of the path due to the snow it was only the very faint trace of her footsteps that actually helped keep us on the right track! It was the best feeling to make it over the top of the pass in those conditions. The weather calmed completely and we could see the green valley below us. Definitely one of our highlights so far.

“We walked and enjoyable 16 miles from Patterdale to Shap in April, taking in The Knott and Kidsty Pike, which is the highest point of the original route at 2,560ft. My favourite memory from this section was stopping for lunch on top of Kidsty Pike and spotting a family of deer peacefully grazing way down in the valley. It was really beautiful to watch. This section took us to the end of our journey through the Lake District. 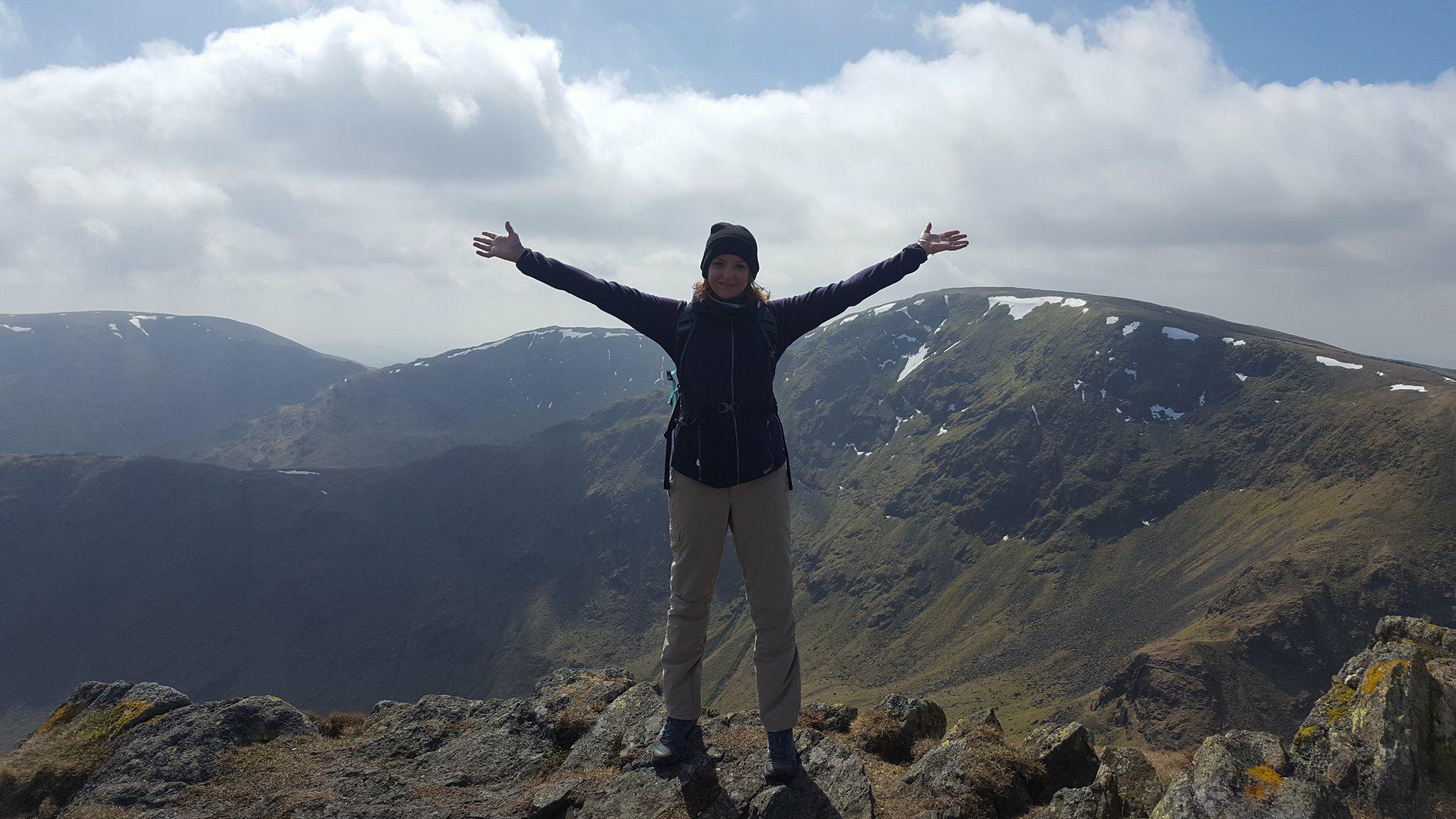 “A little later than scheduled, we walked the 20 miles from Shap to Kirby Stephen in early June. The limestone landscape is a complete contrast to the rugged mountains of the Lake District. As are the humid temperatures compared to the winter snow we had encountered during our earlier walks! I’m pleased to say we are now back on schedule.

“The route has taken us to parts of the country I have never seen before. Whenever we’ve had the opportunity to walk higher, we’ve gone for it. It’s been tough but amazing and the landscapes are beautiful. Walking the route in sections over the year means we’ll see the country in all seasons. The weather has been so dramatic though, and throughout the Winter we have seen all the seasons in one day! 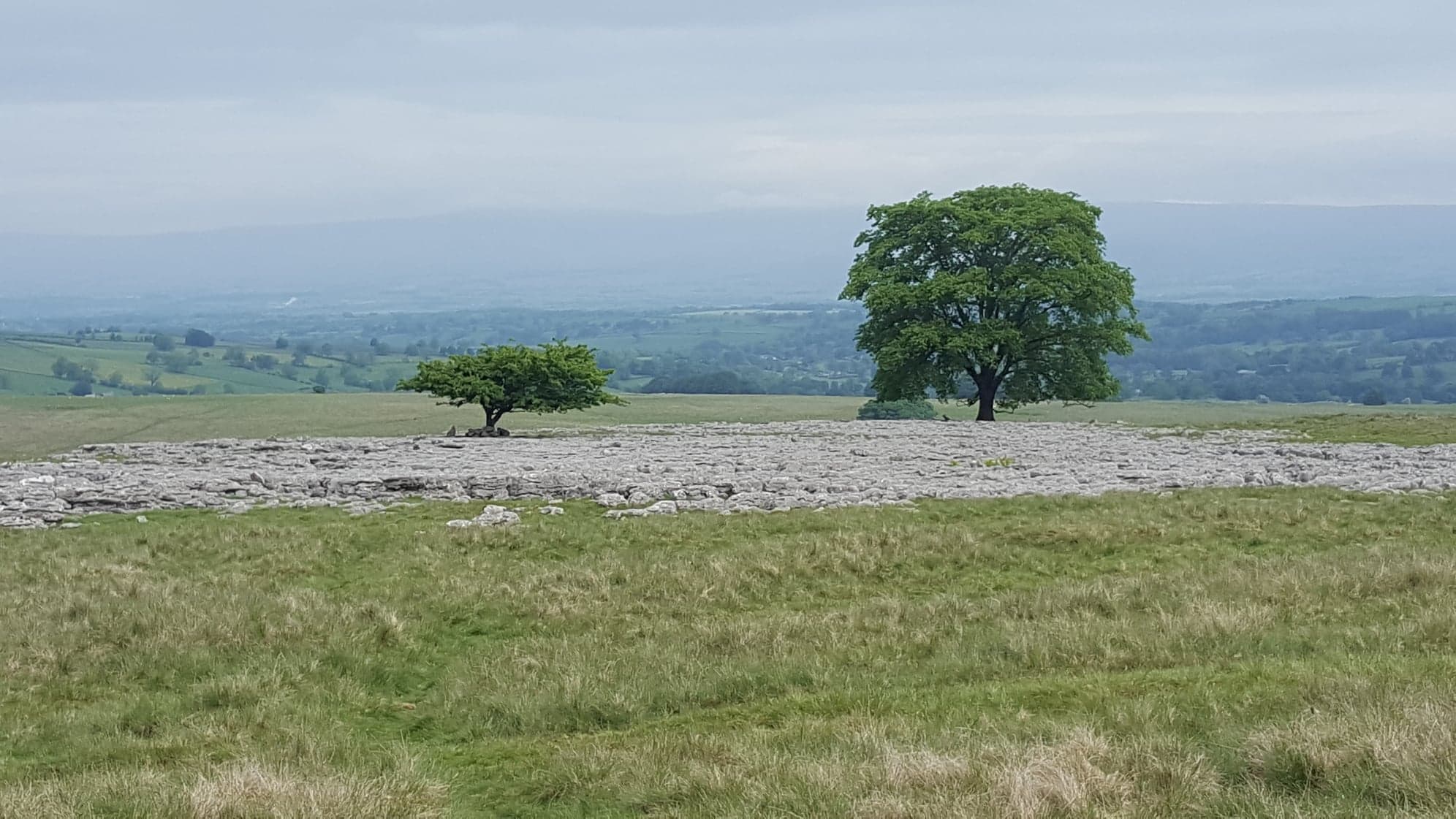 The limestone landscape on the route from Shap to Kirby Stephen.

My advice for other parents who enjoy adventure and the outdoors

“Walking has been so beneficial to me, I have since put myself forward to be the leader of the Love her Wild Lancashire group. The group is open to women of all abilities, who also love being outdoors, going for short walks, wild swims and camping overnight.

“My advice to others who want to get back out there is that there is always a way. I would always naturally feel guilty about leaving my children with a babysitter, but they are fine. Set yourself a challenge over a reasonable amount of time. Join relevant groups, and surround yourself with inspirational people, who will encourage you further.

(We hope to catch up with Fiona early next year to see how the full walk has gone!)

How to have an epic adventure on your...

Get outside: How I ran a marathon after...

[…] and should make you want to get out there and have a go. Walk a long-distance path – Fiona Orrell is walking a section of the Coast-to-Coast walk each month over 2018. Train for a triathlon – […]