Pen y Fan is Wales’ second largest mountain and the highest mountain in southern Britain, standing at 886m above sea level. It’s a popular National Trust location, with over 250,000 people tramping up to the peak each year. At the top you are rewarded with dramatic steep slopes and valley scenery and with the right conditions, you can see right across the four counties of Herefordshire, Gloucestershire, Glamorgan and Somerset. We chose to climb Pen y Fan with our toddler and preschooler as part of our four-month challenge. Here’s how we go on. 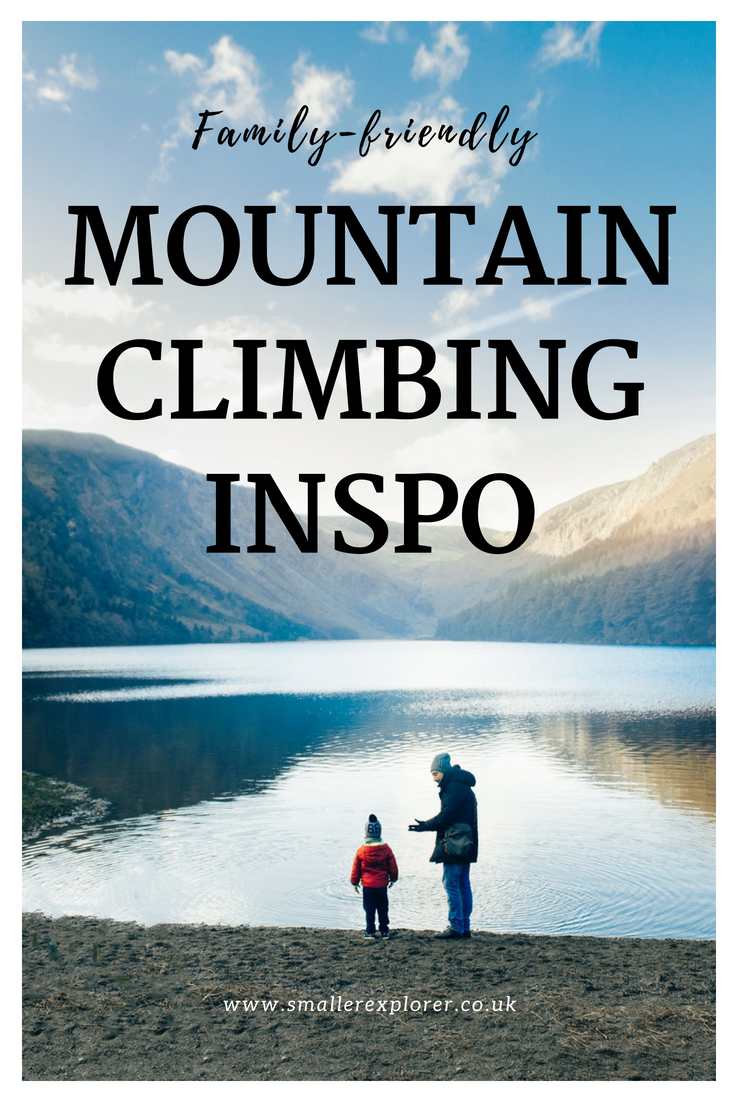 Why did we climb Pen y Fan with kids?

It’s been fun researching family-friendly places to try out different challenges with the kids and after trying out indoor climbing at home. We get to explore somewhere new in the UK, and try something different at the same time. However, it’s also pretty tricky to find places that are not too far away from where we live, and find places that are going to be fun for kids too. I considered climbing Box Hill in Surrey, Mount Snowdon, Cley Hill in Wiltshire and the Golden Cap in Dorset, but none quite fitted. Either not that challenging, not quite mountainous enough, or too far away.

While looking up the tallest mountains in the UK, I remembered the Brecon Beacons in south Wales, and Pen y Fan – the second highest mountain in Wales after Snowdon. Challenging enough but possible with children as there is an easy route to climb up it. Plus it’s near to my parents-in-law, so we could split the journey. A Pen y Fan climb it was.

Pen y Fan is thought to mean summit of the Beacons, which is pretty accurate. The Brecon Beacons is a mountain range in southern Wales, and easily accessible from the south and central England. For the geology buffs, they are made of old red sandstone, have north-facing escarpments and glacial features like lakes. Plus some awesome scenery. Count us in. 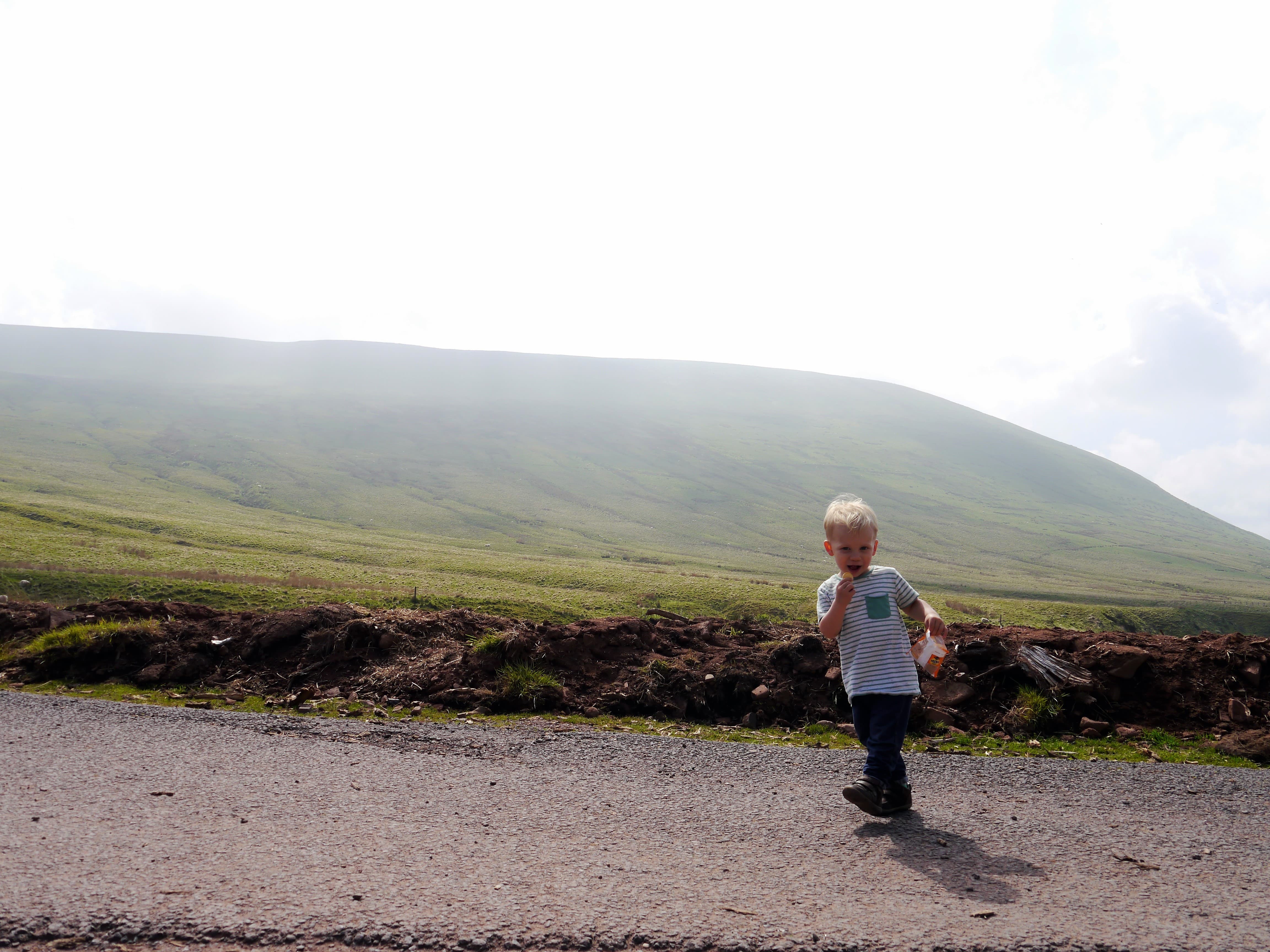 How easy is it to climb Pen y Fan with children?

The easiest route up to the summit and back again of Pen y Fan takes between 2.5-4 hours to climb. It’s a four mile round trip. If you have a relative amount of fitness, and take it steady, you will be fine. We saw plenty of young children on our climb up Pen y Fan, even a baby or two in carriers.

Our four-year-old managed about a third by himself. The rest of the climb, he was lucky enough to get a shoulder carry! Our two-year-old travelled in luxury in our Little Life carrier, but he actually wanted to walk a lot of the walk down again.

The first mile is a long, slow ascent, so is probably quite dull for kids. Once you get past halfway the route becomes more interesting. The views are more dramatic, you begin to see the clouds grow closer, the ground gets a bit rockier. You can either bypass Corn Du (what we mistakenly thought was Pen y Fan) or scramble up there first. It was worth the extra hike up this slightly lower mountain as our view wasn’t obstructed by clouds.

Pen y Fan has a long flat summit, with a National Trust plaque for the obligatory explorer photograph. However, we didn’t feel so much as explorers on our hike up Pen y Fan as mass tourists, as there was so many people you had to queue and wait for said photo! Regardless, it’s a glorious walk that can be enjoyed by anybody of reasonable fitness or age. Hikers can expect spectacular views both sides, particularly to the south and over the Neuadd Valley down to the reservoirs by Methyr Tydfil.

Our kids really enjoyed it. Yes they did complain at times to be carried but no more than if we were just out in town. In fact, our four-year-old got really excited by the idea of climbing a mountain, and I’m sure Pen y Fan feels absolutely huge to him. He hasn’t stopped talking about climbing Pen y Fan since we’ve returned. He loved the top as we were in the clouds, which was a little different and eerie.

Small explorers at the summit of Pen y Fan 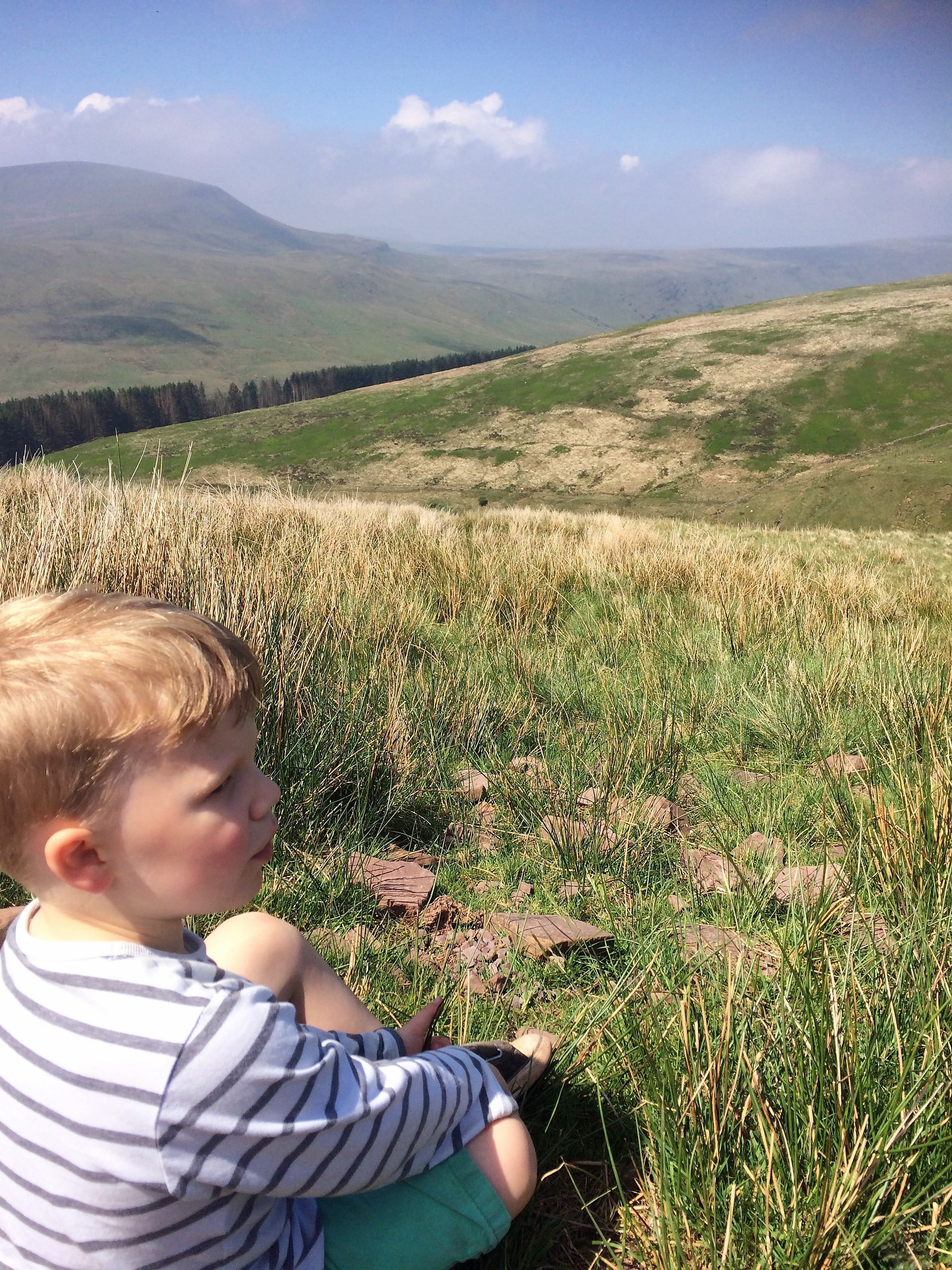 A moment of reflection at Pen y Fan

Though Pen y Fan is a relatively easy climb, we did actually see a mountain rescue helicopter in action. Even climbing straightforward mountains should not be taken lightly, whether you have children with you or not. We took plenty of water obviously. There are kiosks in the car park with cheap water to buy for £1 (though try to bring enough with you if you can so you don’t have to add to the plastic pollution!).

Snacks were ideal for bribery. Our kids moaned a bit and wanted to be carried. Older children probably will too. We stopped at the top for a picnic lunch and a rest before coming back down again, which seemed to work very well.

Get there early if you can as the car park fills up rapidly. We arrived about 10am and had to park about 100m up the road, though this wasn’t really too much hassle.

Pack for all weathers. We had a massive parent fail and forgot hats. We did remember sun cream – phew, but weren’t banking on how hot it was going to be. The past few days had been raining so we were ready for coats. The weather can change rapidly on the mountains, so even though it’s annoying to carry all the excess gear, it’s advisable.

Go with friends. Our children really enjoyed climbing with their older cousins. I think they would have wanted carrying a lot more if they were just with us. In fact, on the way down our toddler refused to be carried by me and wanted to hold his cousin’s hand and walk.

Throw in some facts of the day to wow the kids. Did you know that the Brecon Beacons used to lay at sea level, and the ripples you can see near the top of the peak are actua

Add on a couple of hours time, or make it a day trek. You could get up to the summit of Pen y Fan and back in 2.5 hours if you were quick. With kids, it’s a different matter! Plus you will be carrying more gear/them so will be much slower. I was walking at a snail’s pace within 10 metres of setting off with my toddler on my back. The gulleys carved into the path at intervals up the mountain also provide entertainment for the kids to jump over/paddle in (as does the small brook at the bottom – completely blissful to walk in once you’ve descended.)

Watch the weather forecast as things change quickly. We used the Met Office. You can search by Pen y Fan. We decided to only climb if the conditions were right. For two days we thought we wouldn’t be able to climb, then with a stroke of luck, the sun came out so we jumped. As did the rest of Wales!

All in all, hiking up Pen y Fan was a really fun outdoor adventure for all the family.  Plus there is the added bonus that your children should sleep really well. Here’s hoping! 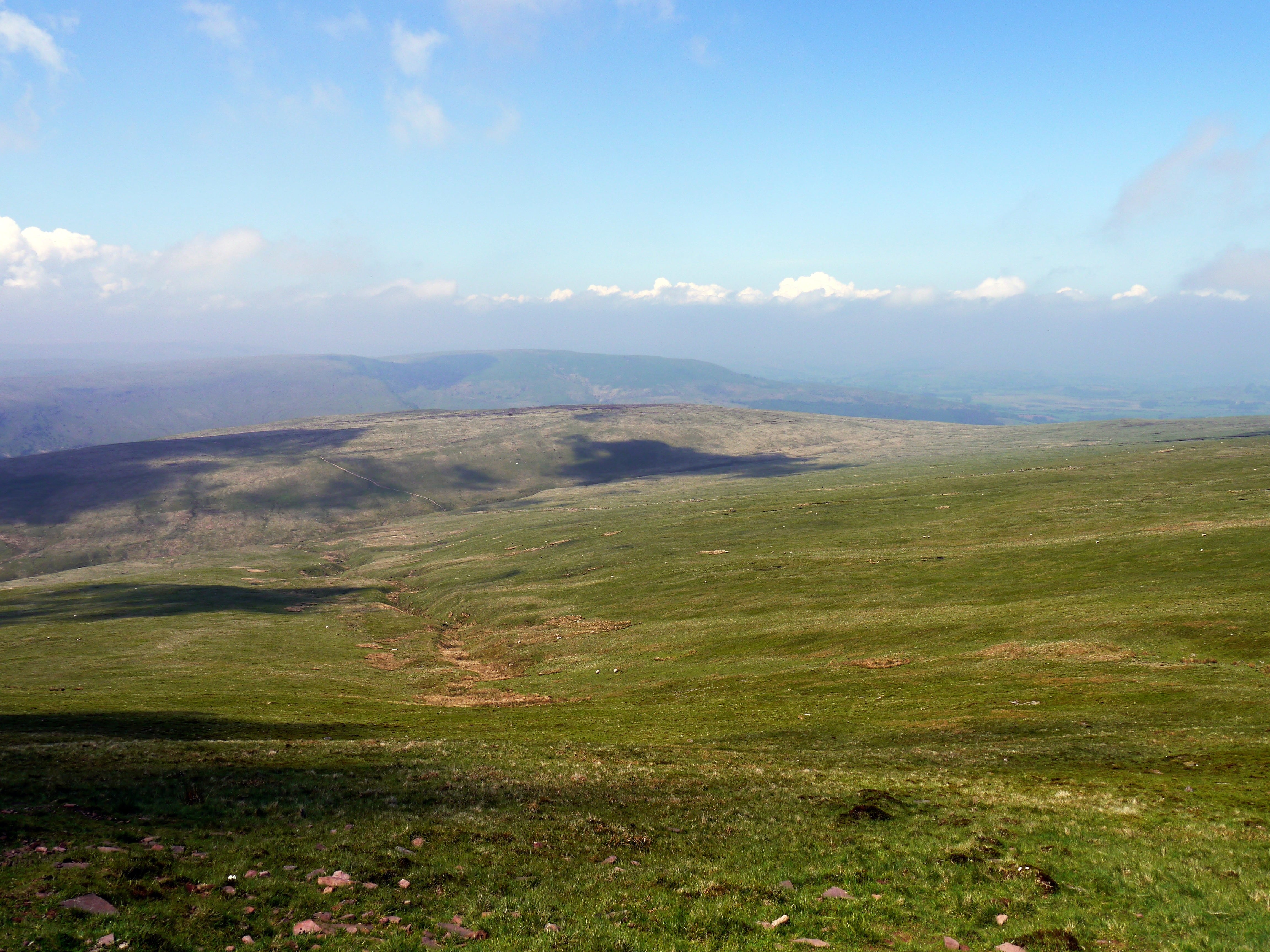 View over the Brecon Beacons from Pen y Fanc 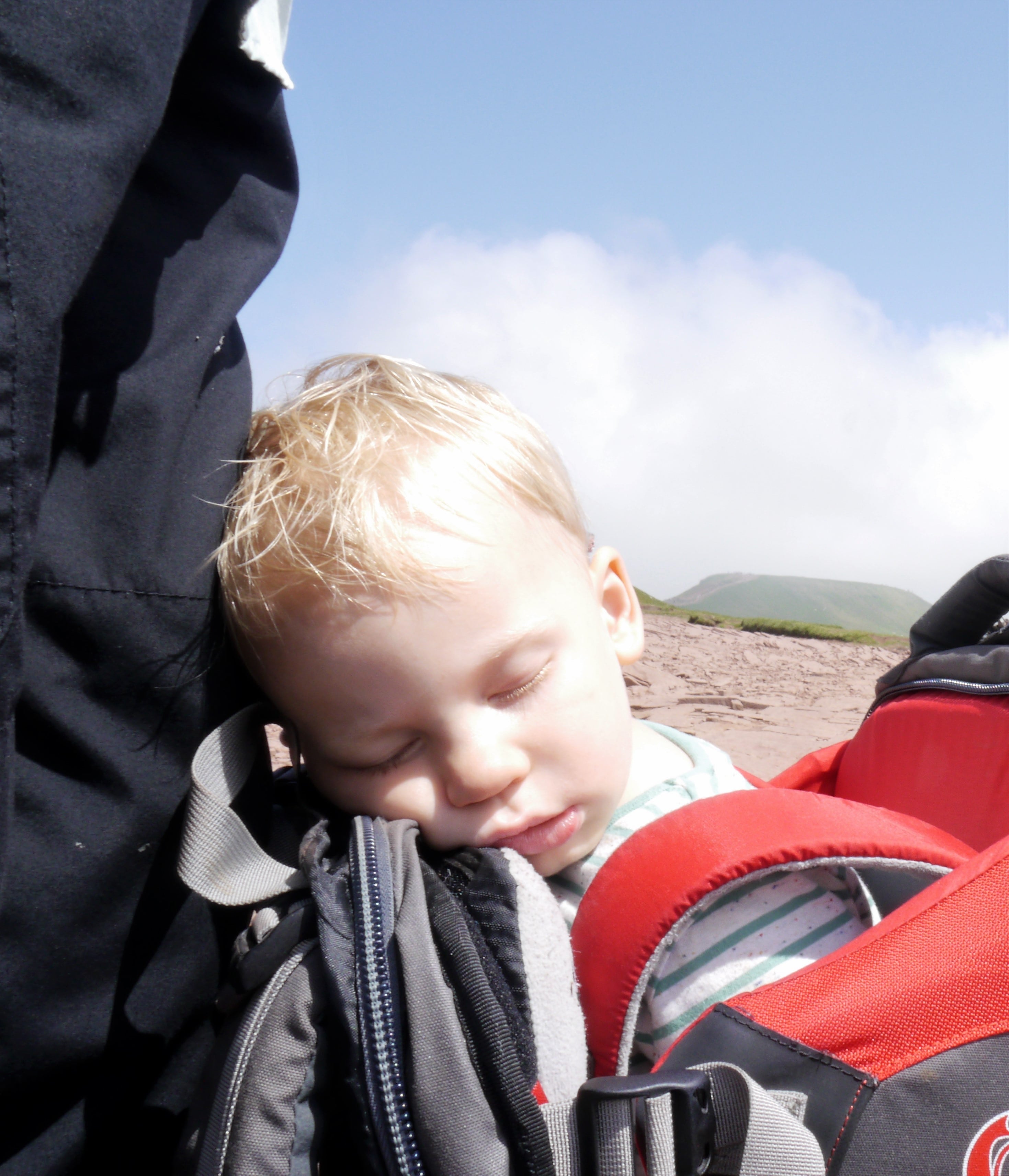 Toddler worn out from climbing

Fun things to do in Northumberland with kids

[…] it. We picked up three water bottles, two crisp packets and a chewy bar wrapper on first challenge climbing Pen y Fan and saw two dog poos left wrapped in bags, but not taken away. […]

[…] going to have a go at indoor bouldering, and then tackle a small ‘mountain’ like Cley Hill, […]

[…] Climb your nearest mountain – we went west to Pen-y-Fan as it’s very family-friendly, but you could be bolder with older kids. […]