Dorset with kids is a must-do holiday. Dorset has always appealed to me as a fantastic UK holiday destination, particularly now with kids (it’s not called the Jurassic Coast for nothing). Plus who needs to fly abroad in summer with this gorgeous weather in England?!  Here’s my itinerary for families who want to enjoy the best of coastal Dorset with kids.

Lyme Regis was our first stop. The fossil capital of the world. Probably. And rather pretty too. Think pastel ice cream coloured houses, hilly, narrow streets and independent shops. Did I mention fossils too? Yes, lots of fossil shops, which are fun to browse around. There’s even a small fossil and dinosaur museum housed in a lovely old Georgian building. It’s a little pricey at £5 per adult but worth it if you have dino-mad kids. Tons of fossils, loads on geology (if you have time to read. We didn’t. Sob) and some old papier-mache dino relics lurking about. 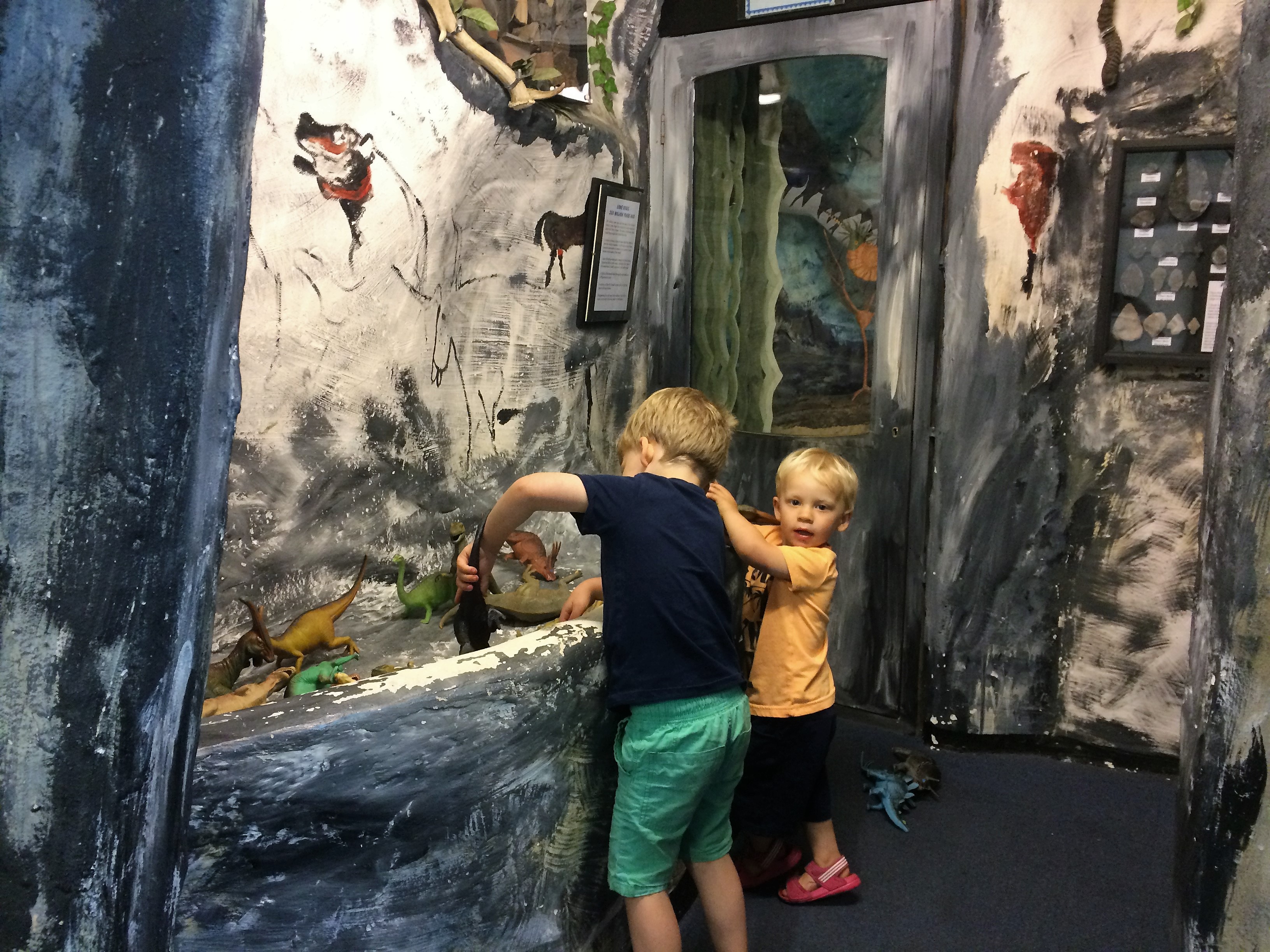 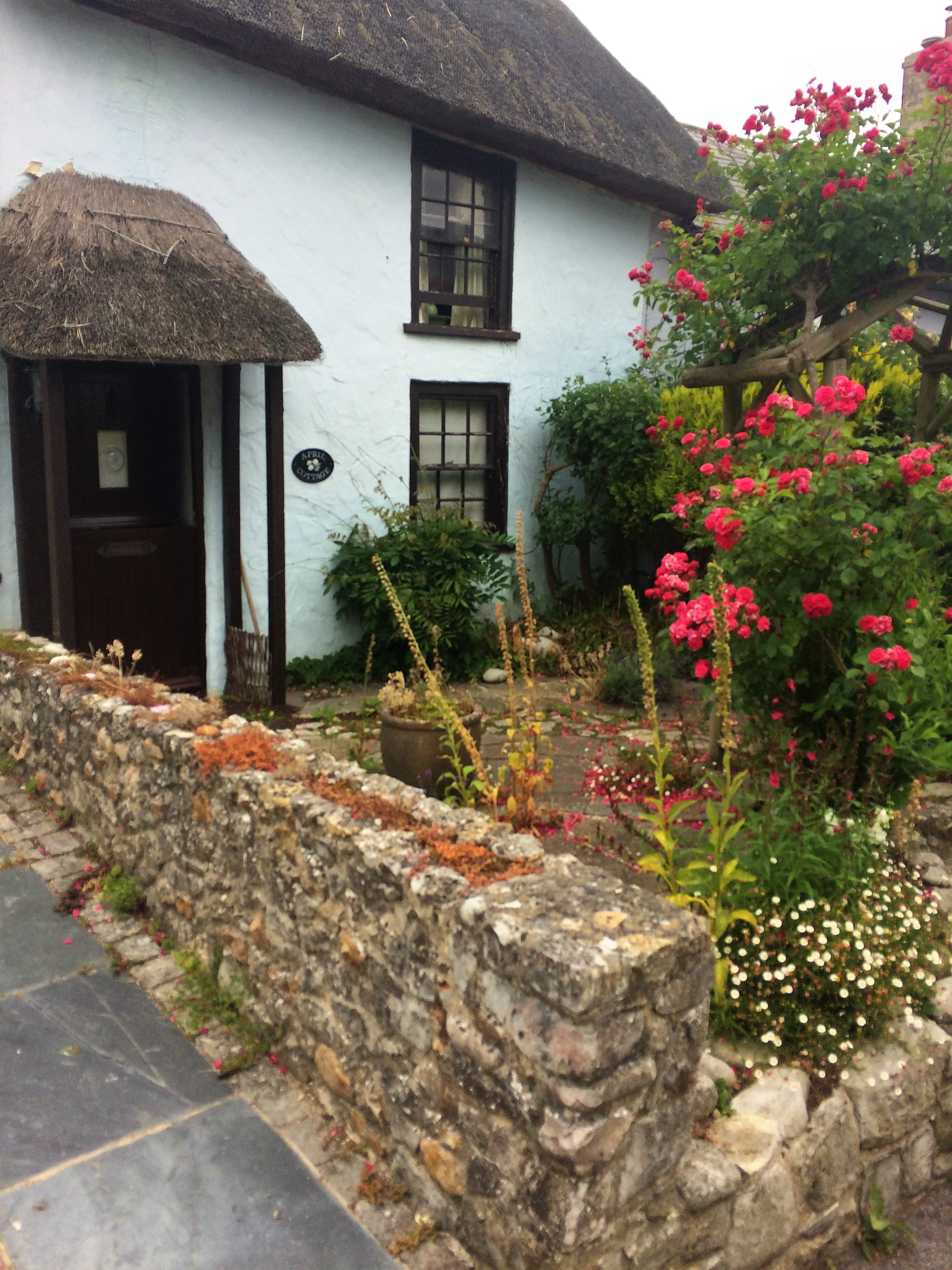 We stopped for lunch in Penny Black, a vintage cafe at the back of an antiques centre. It’s good for buggies as there’s an outside area with space. Standard lunch fare, but awesome cakes. I don’t think there’s a stand out foodie spot in Lyme Regis, but I could be wrong. There’s plenty of choice anyway, and in worse case scenario, there’s always fish and chips on the beach. 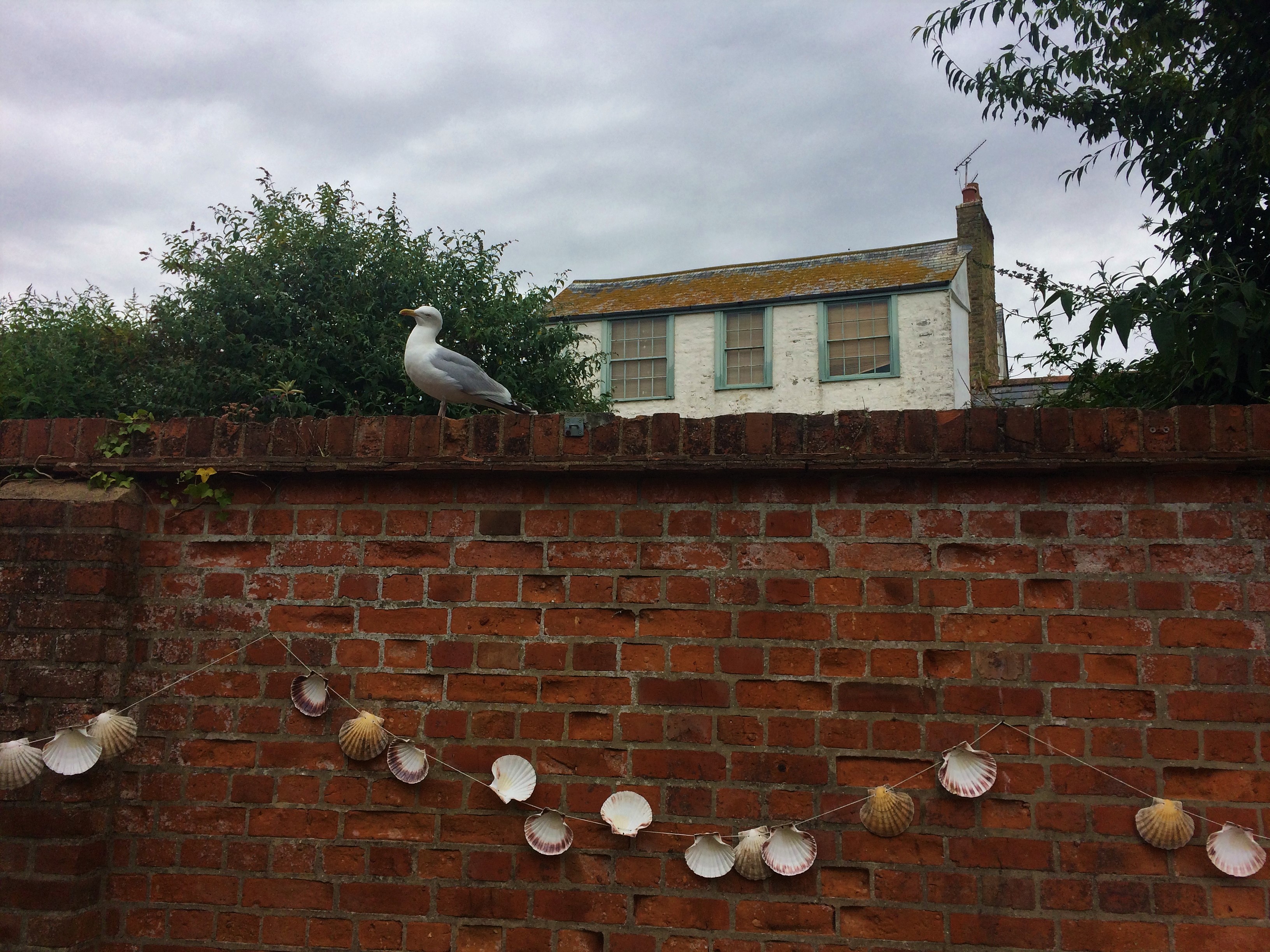 For fossil hunting, head to Charmouth beach. You can venture out solo to try your luck, but a visit to the visitor centre is recommended to learn the techniques for hunting out the best of the ammonites. Even if fossils aren’t of interest, the beach is lovely just for good old sandcastle building and seaside fun. You can even hire a beach hut. Monmouth beach, in Lyme Regis, is also great for fossil hunting, and you’ll often see huge fossils on the beach here too.

If you do have dino fans in the family, they may be interested to know that a girl aged 12 called Mary Anning discovered the first ichthyosaur fossil in Lyme Regis (It’s now housed in the Natural History Museum). Mary Anning was featured in the TV series Dino Dana, so if your kids watch this they may have some clue what you are going on about! And another fact – the ‘she sells seashells’ tongue twister was written about Mary Anning. I was excited by this. My son slightly less so I have to admit. 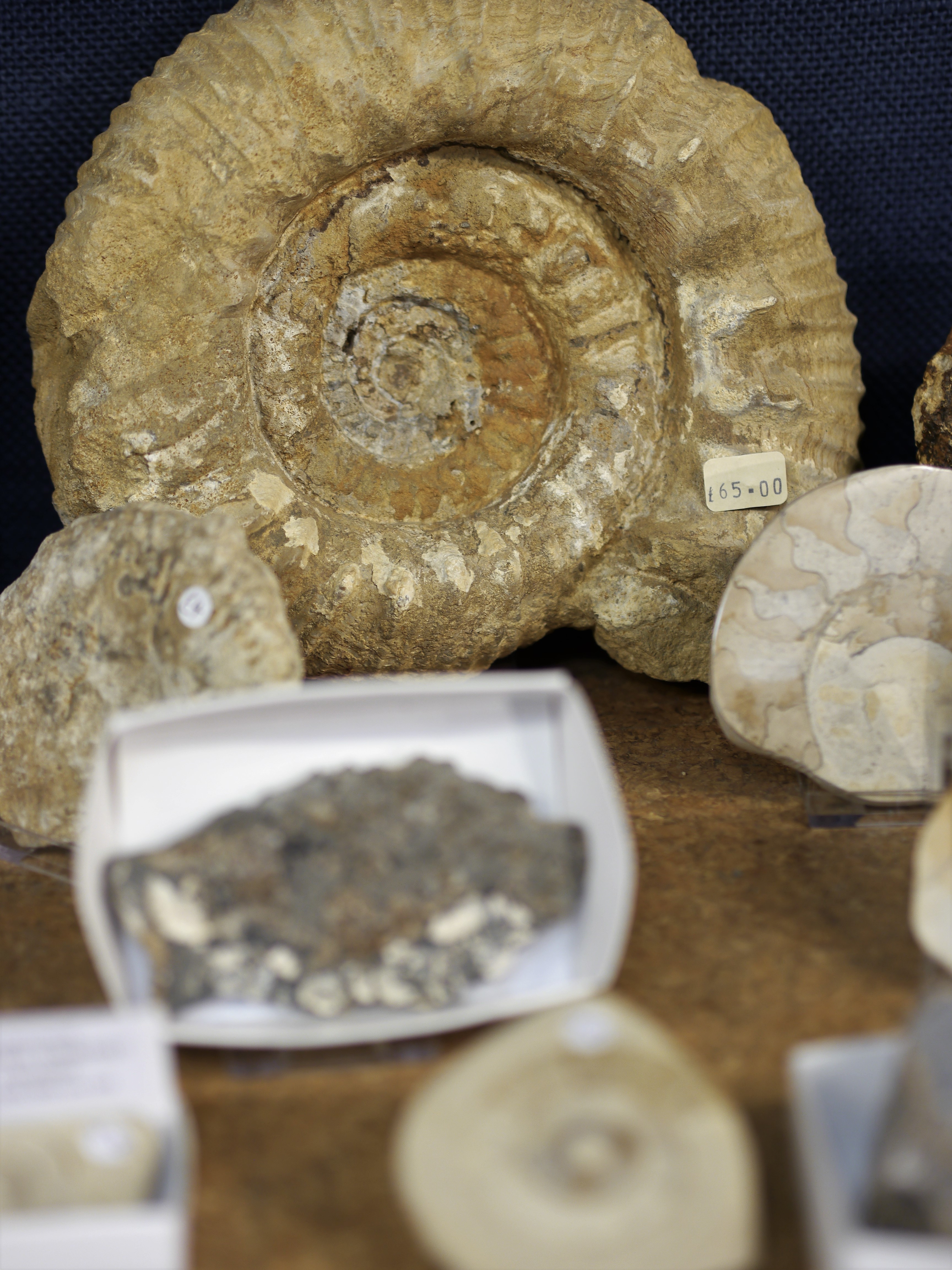 For more dinosaur action, the Dinosaur Museum and Dorchester County Museum in Dorchester are both worth a visit. Unfortunately dippy the dinosaur (from London#s natural history museum) has now moved on from the County Museum, but there’s lots more dinosaur-related exhibits still to enjoy. In 2011, Sir David Attenborough unveiled the largest pliosaur skull there, marketed as ‘the world’s biggest bite’, which kids (and adults!) should love.

As part of my ‘4 adventures in 4 months with a 4 year old‘, we tried our hand at sailing a boat off the coast of Portland. You find out more about how we got on here.

After our sea legs had returned to shore, we explored more of the Portland coastline. Chesil beach is world-famous 18-mile long stretch of pebbly beach that runs from Portland harbour up to West Bay. It’s not really a beach at all, but a spit created by the sea. The pebbles range in size from the size of saucers down to pea-size stones, and the shelving runs 200m across and 15 metres high. It really is a beautiful stretch of beach to visit as kids will love lobbing stones into the sea, and there’s plenty of beach cafes and things to do along this stretch of coastline like crabbing in West Bay. 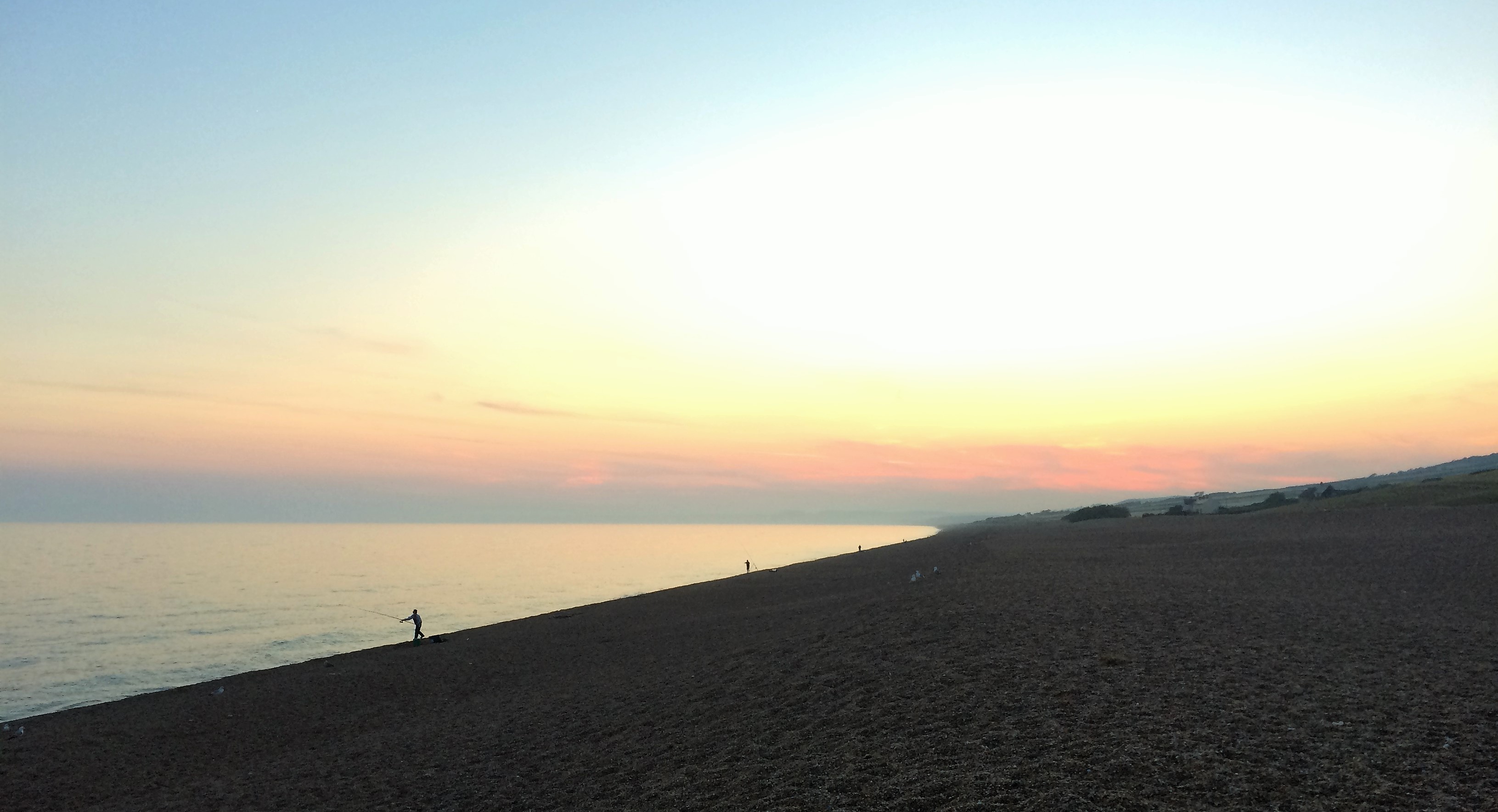 We stopped at Hive beach (Burton Bradstock), towards the end of Chesil, for an hour. Hive Beach cafe is one of the best cafes around for fresh seafood and Dorset ice cream, but is often busy. We grabbed a take-out ice cream and lay on the beach enjoying the sea views in front and cliffs behind us. If you have walking fans in the family, there’s also loads of gorgeous walking trails from here too. For a eye-popping view of Chesil beach, make sure you head east along the coast road towards Abbotsbury, where you can admire the length of the spit, including St Catherine’s chapel, from up high. 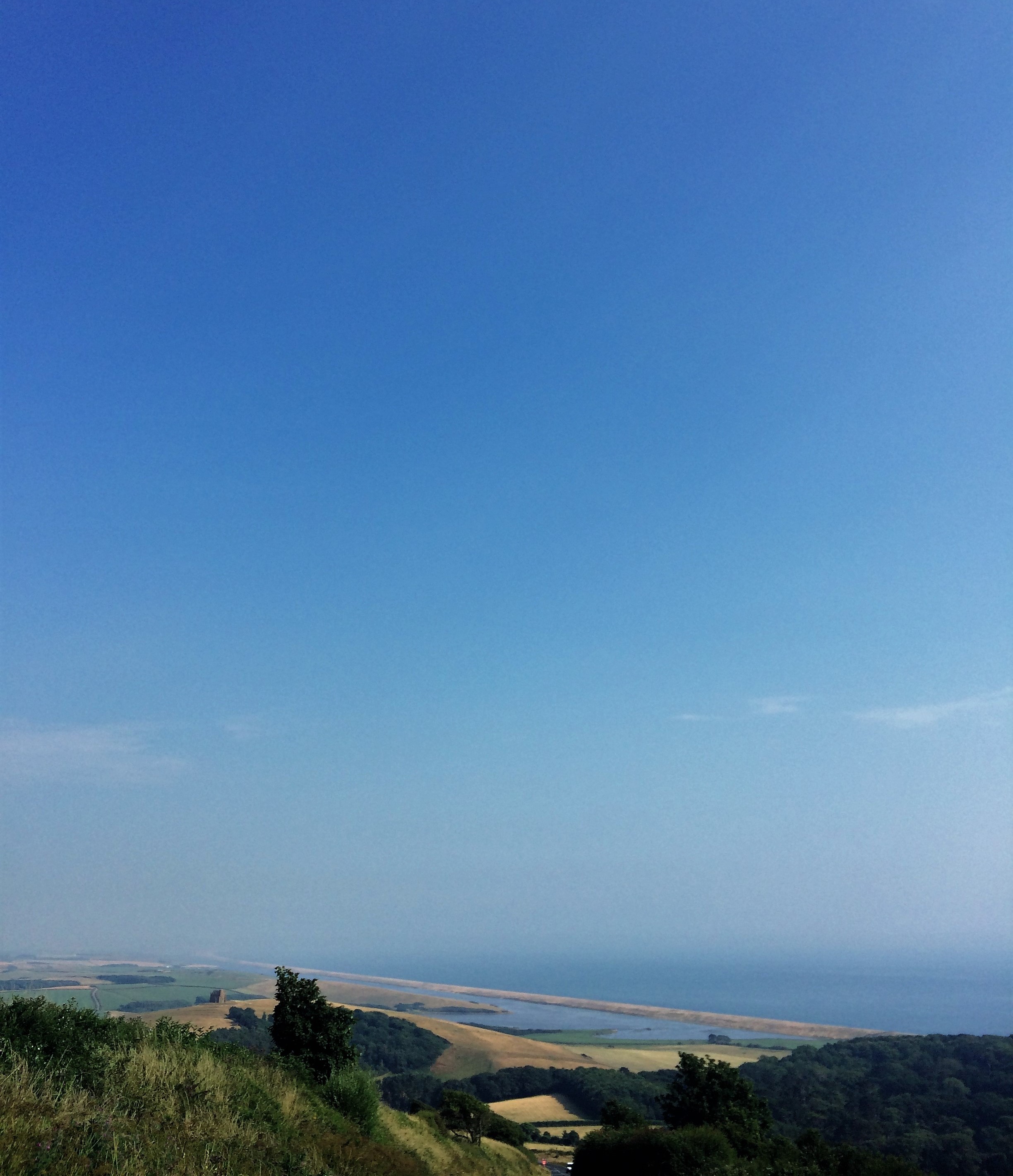 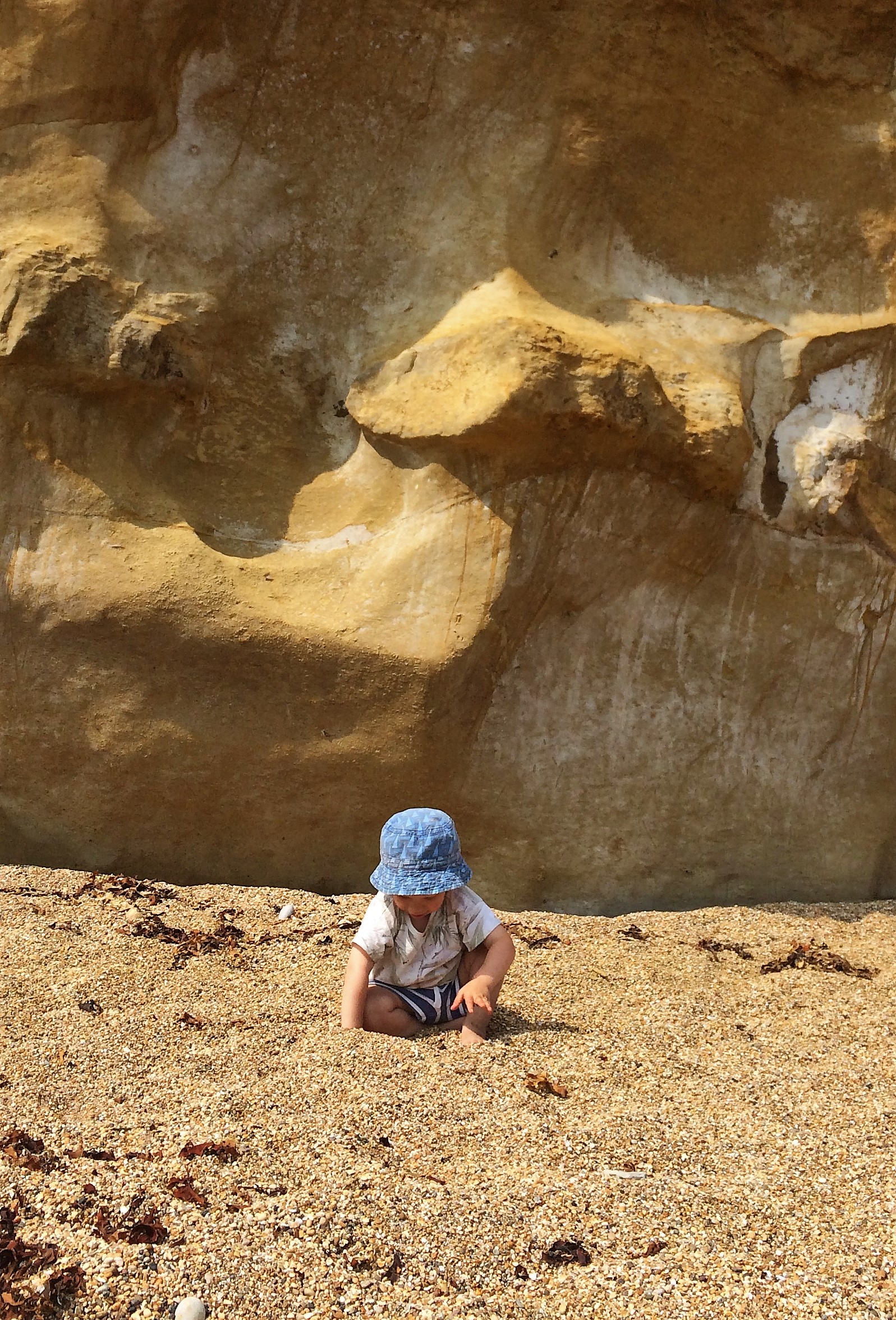 Other places to explore around Chesil beach include Portland castle, Tout Quarry nature reserve near Portland harbour (see if you can find Antony Gormley’s sculptures here) and the Abbotsbury swannery where you can feed swans and cygnets.

Coastal Dorset with kids – Day 3 for dawdling at Durdle Door

Heading east, we visited the Purbeck shoreline on our third day. Even though it’s not much more than an hour from Lyme Regis and Portland, the landscape feels quite different. The shoreline here is one of the wildest on the south coast. It’s choc-a-block with limestone caves, ragged sea arches, coves and rock pools, and the chalk downlands inland are a haven for wildflowers and wildlife.

Durdle Door is a major attraction for visitors to Dorset. It’s a dramatic sea arch carved by the sea, which hardy seafarers can kayak or swim under. Unfortunately, Durdle Door isn’t really that family-friendly for younger visitors. Access to even the viewpoint is a good half hour uphill trek, and the beach is a steep, sharp descent. So we left Durdle Door until another year, and spent some time at Lulworth Cove instead.

If you visit Durdle Door and Lulworth Cove, be prepared for it to be jam packed with tourists. Don’t get me wrong, it is very, very beautiful, but I’m not sure it was worthy of quite so many visitors. The perils of being famous I guess. Coach-loads of tourists. That said, Lulworth Cove did grow on me, and it is very family-friendly. It’s a gorgeous white pebble cove, with ice blue clear water, which is calm and shallow – perfect for little feet. At low tide there’s also loads of rock pools, so bring nets. There’s easy access to the cove, and loads of food and drink options. We ate at the Lulworth Cove Inn but there are plenty of options. If you stay longer Lulworth Castle looks amazing (also home of family-friendly Camp Bestival). And for older children Lulworth Outdoors organises cool stuff around Lulworth such as mountain biking, archery and coasteering. For water-based adventures try Jurassic Coast Activities. 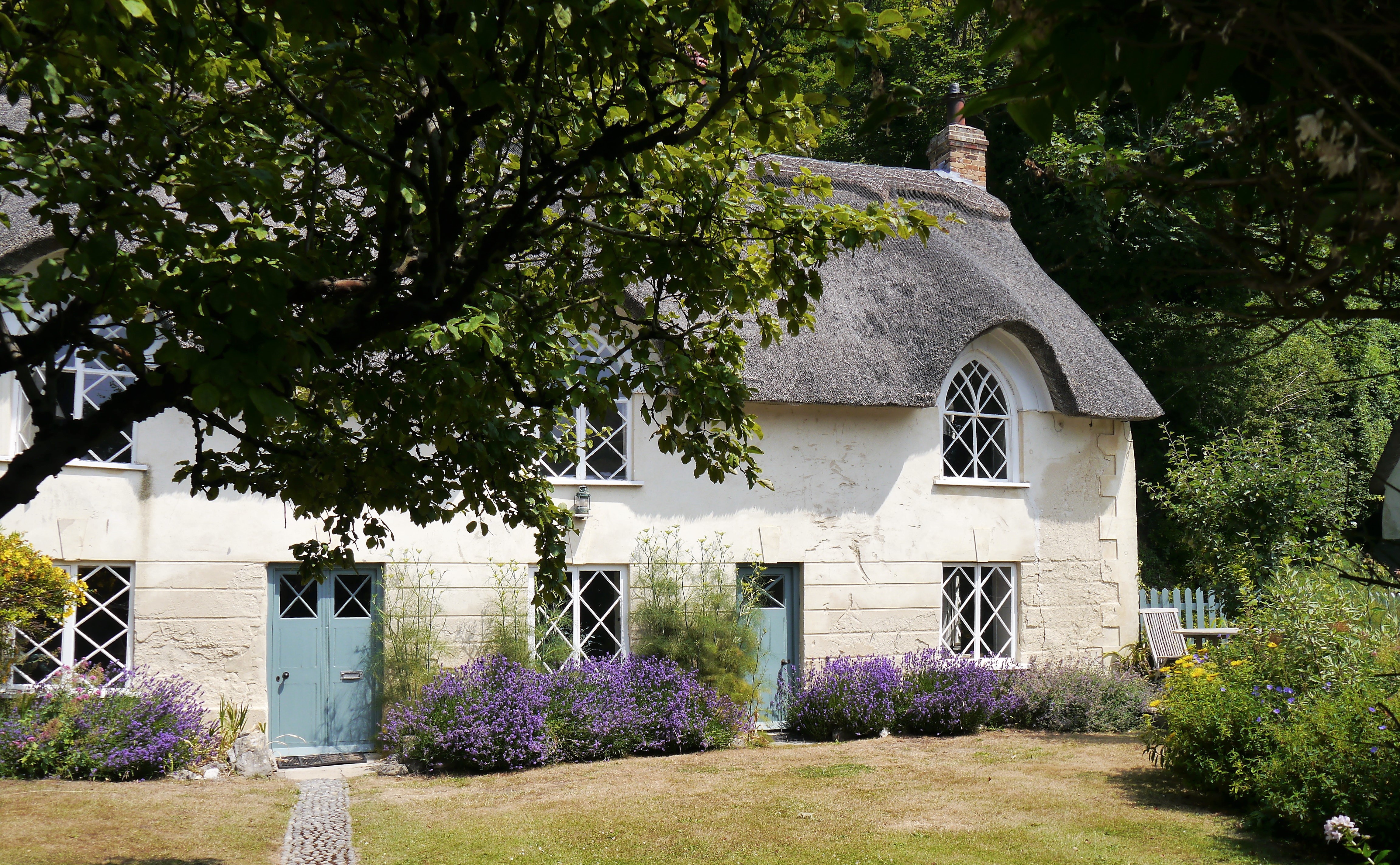 If you are suffering from dinosaur withdrawal, then a short 3.5km walk, suitable for buggies, from Lulworth Cove to the fossil forest may help. The fossil forest is a petrified ancient cypress forest from Jurassic times that grew in a swamp, and is a fascinating visit back in time.

Coastal Dorset with kids – Day 4 for castles and kayaking

On our last day, we headed further east and inland to Corfe Castle.  This castle was built with Purbeck limestone by William the Conqueror in the 11th century to guard the only natural route through the Purbeck Hills. Now in ruins, kids will love exploring its many nooks and crannies and gawping at the views across the Dorset landscape. 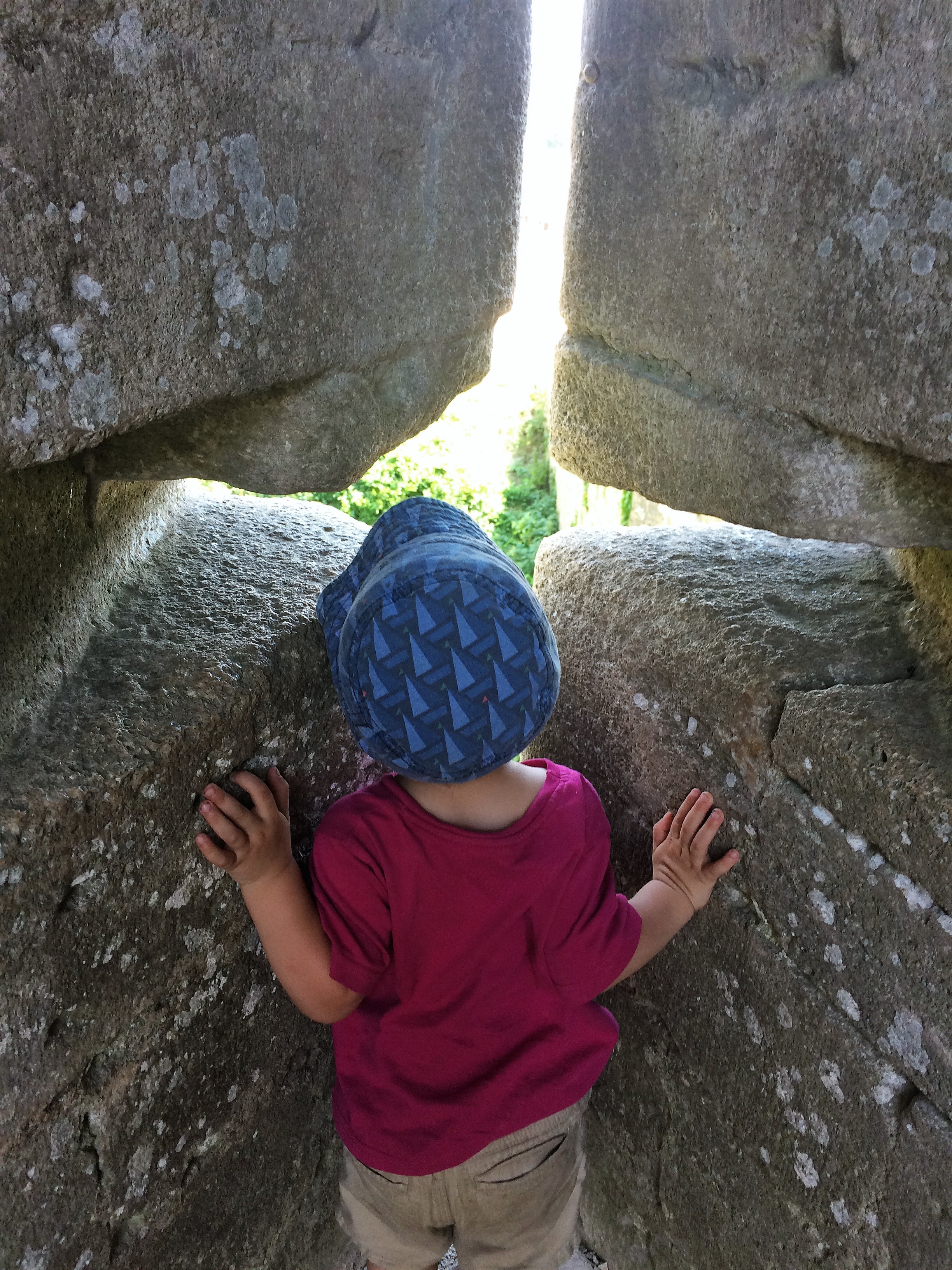 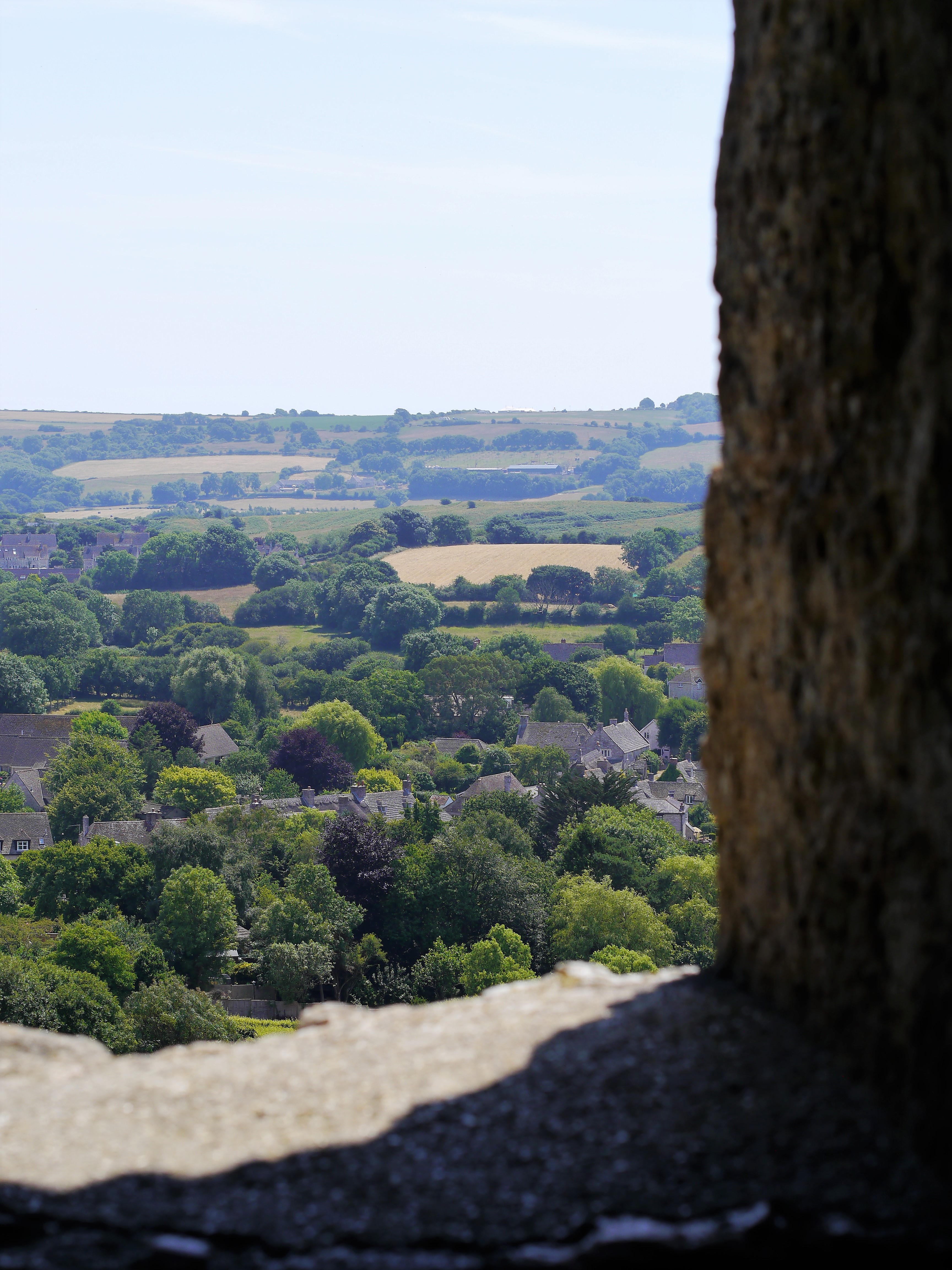 After lunch at the castle’s cafe, we headed back to the coast at Studland Bay for some kayaking – another win for our ‘4 adventures in 4 months with a 4 year old’. You can read about our kayaking experience here. Studland Bay is a long sweep of golden sand and calm waters perfect for family watersports. There’s a hire station right on the beach if you want to do-it-yourself. For bigger adventures, try Foreadventure, who specialise in kayaking, paddleboarding, beach foraging and bushcraft. They even take out 4 year olds on mini kayaking adventurers.

Studland Bay is another tourist hotspot, and was very busy when we arrived (outside of school holidays but in very warm weather). Of course there’s the beach to enjoy, but there’s also a cool reptile discovery trail for familes, plus geocaching in the dunes. And if you are really lucky, seahorses have been spotted on snorkel trips from Studland Bay. 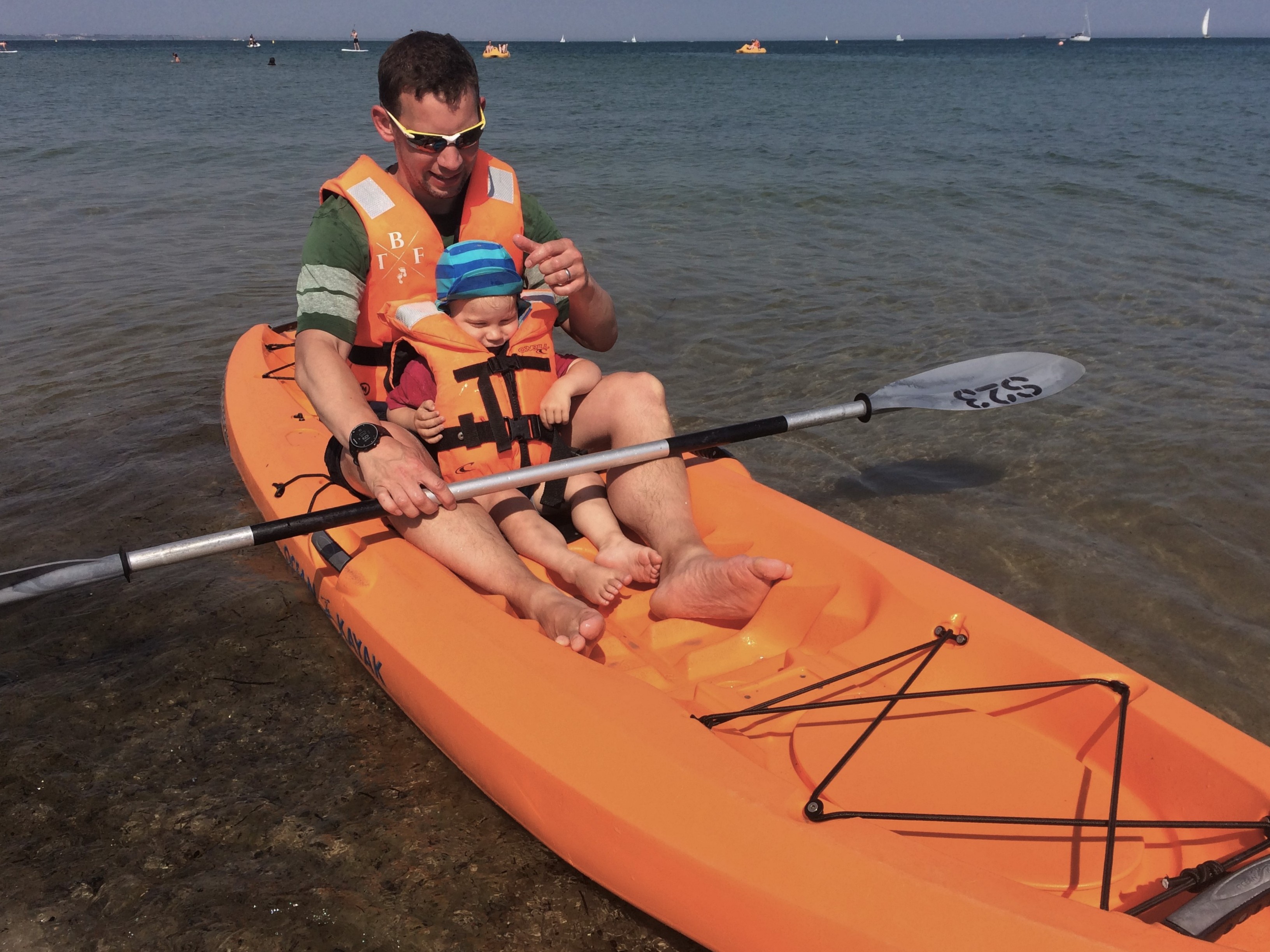 I’d love to know about your favourite places in Dorset to visit. Tell me in the comments below.

Family-friendly places to stay in Dorset

Other family-friendly options include:-

Summerlodge, Evershot – a country house hotel with restaurant and spa 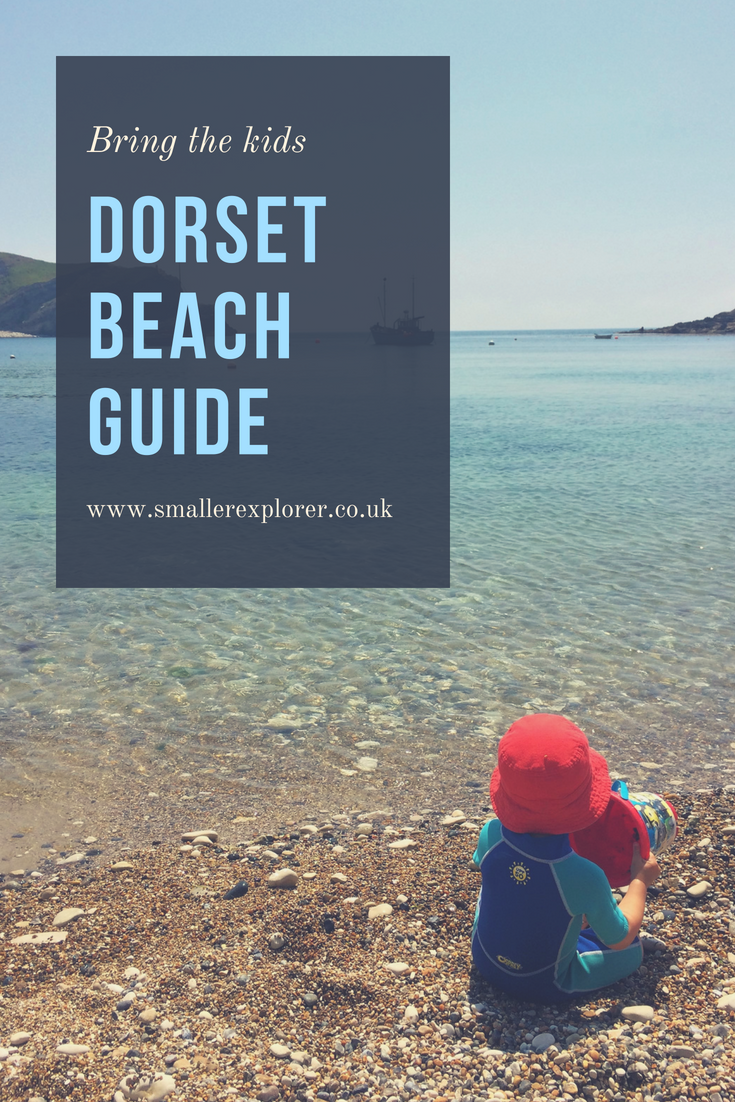 […] families to enjoy camping in a little more luxury. In fact we had to bargain with our sons daily to see more of Dorset than the farm. They would have been quite happy to spend all day running around the […]