The headlines over the past few weeks have rightly been dominated by a certain female ultra runner – Jasmin Paris. Not only did she obliterate the course record for the scarily-titled Spine Race, she was breastfeeding at the time, so had to pump milk at each checkpoint. I honestly think she is up there with extraordinary sportspeople like Usain Bolt or Michael Phelps, breaking past, what was thought to be, the limits of human capacity.

It got me thinking of other female adventurers out there that I admire. Whenever I need a bit of inspiration and adventure ideas  and what other women are getting up to out there, these are the ladies I look to. Just need to add Ms Paris to that list now.

Sarah is amazing. Not only has she run Marathon des Sables, hiked the Appalachian Trail unsupported, and cycled the Pacific Coast Highway, she set up the Tough Girl Tribe group and podcast, and helps champion other women getting out there and exploring this wonderful world we live in. If you need some ideas and inspiration of adventurous things you could do, have a listen to one or two podcasts, where Sarah interviews all sorts of women doing cool stuff.

For UK outdoor inspiration, Sian Lewis is your lady. Whether it be hiking, wild swimming or camping, Sian knows about it. She’s written a book about her experiences – The Girl Outdoors – as well as regular blog post updates which include reviews and tips.  Her blog has won loads of awards, and is a minefield of useful information for anyone who wants to get outdoors and enjoy our little island.

Bex’s USP is that she’s just an ordinary gal, with an ordinary background, who has managed to get out there and involved with adventure. Her mission is to inspire others to do the same. Bex has hiked the length of Israel and across the Jordan desert, sailed the North Sea, kick-scooted the length of the USA, led female expeditions across the world, and set up community group Love Her Wild. Phew.

Anna is like chicken soup for the soul! I listened to her talk at an event about a year ago, and she’s so super positive and can-do, it seeps into even the most die-hard sofa lover. She ran across New Zealand and wrote a book about it – Pants of Perspective. She’s also cycled through each state in the US, rollerbladed around Amsterdam, cycled the length of the Andes, run along Hadrian’s Wall and gets up to all sorts of mini adventures closer to home too such as wild camping around London. Anna is a great believer in big adventures and microadventures – meaning no excuses. There is something out there for everyone.

Lucy and her dog are walking the length of the earth, from top to bottom. I know. She’ll be the first woman ever to do it. She started in 2017 at Tierra del Fuego at the bottom of South America and is headed to Barrow, Alaska, at North America’s tip, where she should finish in 2020.

Kirstie and her family are my real life inspiration. While I love what all these epic female adventurers are up to, alas, I can’t follow in their footsteps as I have two young buggerlugs needing my attention right now. However, Kirstie reminds me of all the amazing things you can do when you’ve got kids in tow. Cycling is their forte. They’ve cycled pretty much most places I can think of. Plus they’ve tried and tested most other forms of transport – boat, canoe, campervan, rail and foot. Their website has a huge amount of useful information and inspiration, so if you are like me and are adventurous but have kids, head on over.

Beautiful inside and out, Pip is a bit of a legend. Adventure travel is her middle name. She’s cycled from Malaysia to London, explored Brazil and Peru to raise awareness of the area’s environmental issues and has recently entered the record books with the first paddle of the Essequibo river in Guyana with Laura Bingham (also a mum) and Ness Knight. I’ve met her at a travel show and she was as enthusiastic and personable in real life as she comes across online. She’s also a bit of an activist for social and environmental good, and a lovely poet to boot.

I couldn’t write a post about female adventurers without mentioning the great Dervla Murphy. What Dervla doesn’t know about biking around the world doesn’t need to be known. She’s toured from Ireland to India, and again with her daughter Rachel along with visiting Pakistan, South America, Madagascar and Cameroon. More recently she has toured Cuba with her three grandchildren and daughter – must run in the family. She writes epic books about her travels, and is a great commentator on inequality and injustice around the world.

Another lady using her adventuring nature for good is Lizzie Carr. Being diagnosed with cancer gave her the impetus to do something different from the 9 to 5.  Lizzie is the first woman ever to have paddleboarded across the English Channel, the first person to have paddleboarded the length of Britain’s waterways and the Hudson River, which she did to raise awareness of the plastic crisis we now find ourselves in. She’s now written a book too about paddleboarding – Paddling Britain. 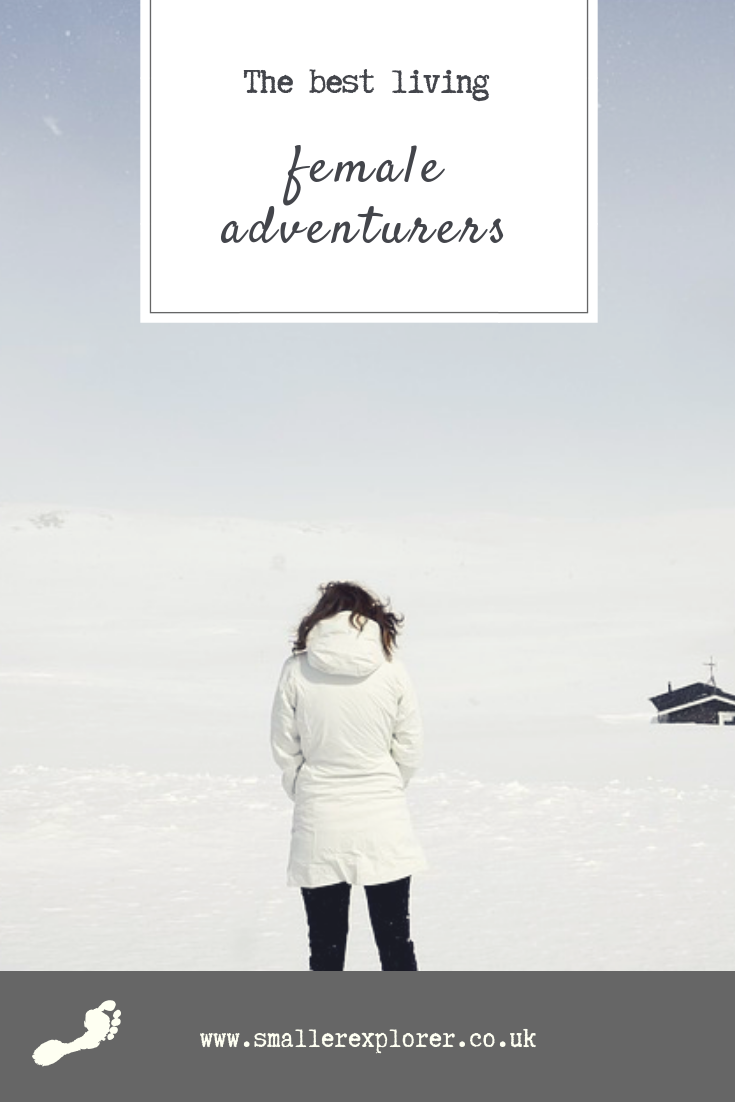