Part of why I set up The Smaller Explorer was to connect with like-minded families. There’s nothing like chatting with others who have managed to do something amazing after having children. It’s so inspiring, and also gives me loads of ideas of what I could do in the future too, and how to do it.

This series hopes to inspire other families who want to get back out there after parenthood, but don’t quite know where to start, or if it’s possible. There was only one lady I could start with – Catherine Edsell.  Catherine is an adventurer, expedition leader, PADI divemaster, Reef Check trainer, yoga teacher, FRGS, TED talker, podcaster and mother of two daughters. Phew.

SE: Were you interested in adventure and travel before children?

CE: Definitely. It was my life! I have been working in the expedition arena since 1997, and was a full time expedition leader until 2004 when my first daughter was born.  I worked on the beaches of Costa Rica protecting leatherback sea turtles and their nests, and as a jungle guide in the Corcovado rainforest. I held the position of Forest Operations manager for Operation Wallacea, running jungle training courses, and organising logistics for extremely remote scientific biodiversity studies in the forests, mountains and coral islands of Buton, Kabaena, and Wakatobi national park, South East Sulawesi, Indonesia. I’ve trekked for 700km down the ephemeral rivers of Namibia, tracking, (and being charged by), desert elephants, whilst leading groups of 17-25 year olds, built harpy eagle hack boxes in the jungles of Belize, explored hidden sinkholes, crystal caves and Mayan ruins, performed reconnaissance trips and developed a new county project for Operation Wallacea in the cloud forests of Honduras, Central America, worked as a PADI divemaster, and lectured in coral reef ecology on the remote island of Hoga in the middle of the Banda Sea, Indonesia, led Reef Check expeditions in the incredible Musandam peninsula, Oman, and the Maldives archipelago , facilitated sperm whale monitoring surveys in the Azores, and rainforest biodiversity surveys in Peru.

Independently; I have explored the Kelabit highlands of Borneo, trekked through the (really!) remote, hill tribe villages of Northern Laos, worked as a line-handler in the Panama canal, then sailed from Panama to Florida on a 31ft ketch called ‘Seahorse’ (should be re-named ‘retch’ and ‘seasick’), trekked in the breathtakingly stunning Langtang and Annapurna regions of Nepal, spent a year in India living in ashrams, elephant hides, mountain huts, desert palaces, and experiencing the full sensory experience that India has to offer, including nearly falling to my death in Ladakh’s infamous Zanskar river, limbed Mount Semeru, (an active volcano in Indonesia) by moonlight – stunning! paddled downriver and stayed in longhouses in Borneo, trudged from Malaysia to Indonesia, (mostly in knee deep mud), and mushed husky dog-sleds through the snow shrouded forests of Lapland.

I was initially under the illusion that I could just strap my baby to my back and carry on, but although this may work in the African bush, or the paddy fields of Nepal, it didn’t really work for me. After my second child was born and I realised that my first daughter was exhibiting developmental issues, my world closed in, and my first real adventure after that was not until 2011.

Wow! Some serious experiences going on there. We already have adventure envy. It’s interesting though that even as a very seasoned explorer and expedition guide, you found it difficult initially after children to get back out there. That gives me hope, and I think other parents should take comfort from this too. Young children are hard work!

Yes. It is tricky to do much when they are young. It gets easier as they get older. The toddler years are hard. I didn’t want to go on expeditions before my children were three as they can’t communicate well enough before then. Myself and my husband did manage to go hiking in the Dolomites, Borneo and Australia when we just had our first daughter.  Travelling with a baby is much easier, but I wasn’t confident enough to do this as a first time mum (and on my own) and it’s too tricky with two on your own.

I can identity with that. I certainly wouldn’t have been able to do much adventuring with my first as I was far too overwhelmed. I found looking after my second son much easier, but then of course, you have two children to look after! Apart from them growing older, what changed in your life that made you think you were ready to get back out there and go on expeditions?

It was when my need to explore was stronger that all the limiting factors in my way, and I took the children to work in an elephant sanctuary in Thailand.  At that time, Hannah was 4 and Olivia 6. We had 5 weeks of holidays and some time to fill. I thought they would still be too young to enjoy a safari, but all kids love elephants and they are HUGE, so more chance of them remembering the experience, so after some research we headed out. I liked the ethos behind the sanctuary, which rescues and rehabilitates elephants that have been treated cruelly by the tourist trade.

It was an amazing achievement and my daughters loved it. Their favourite part was feeding the baby elephants. It was very hands on. We had to muck out, bathe them, plant trees, but they got stuck in. They got a lot of attention as they were the youngest volunteers by far, and there was a lot of support for me from the other volunteers, especially from young women, who loved playing with my kids – a real community effort. 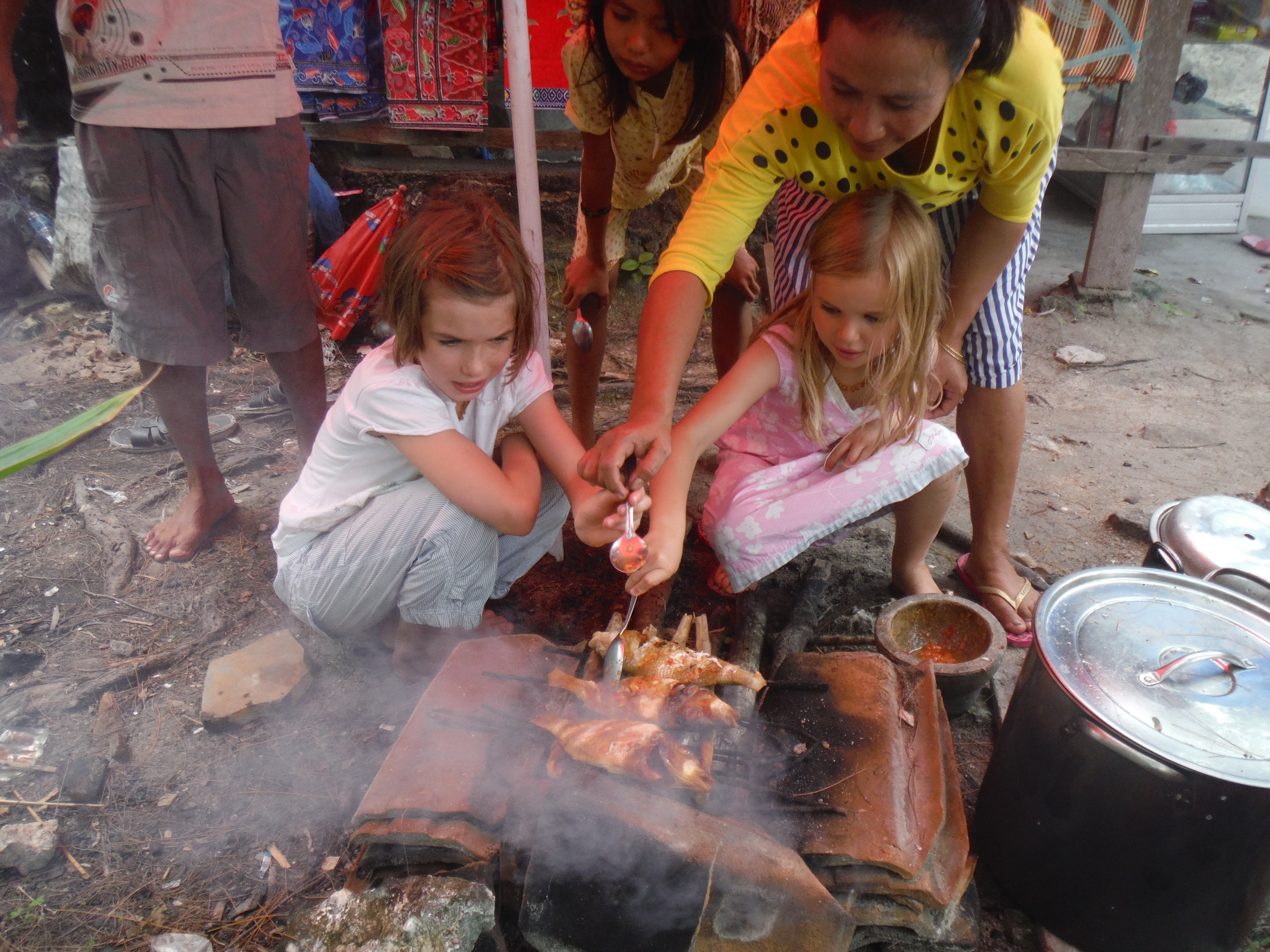 From then on I sought to involve more adventure in my life once again. I trained as a Divemaster, as it is easier to take kids to a beach, than to drag them through the jungle, and I started to lead expeditions again with my kids in tow. Myself and my daughters lived on a remote coral atoll in South East Sulawesi, Indonesia for three summers running teaching coral reef ecology and monitoring the reefs. I already had connections there, so felt comfortable going, and we found childcare with a wonderful local family. I’d spend three hours underwater, and the rest on land. My daughters were seven and nine at this point.

We’ve also done a fair bit of hiking. We’ve hiked the Camino de Santiago de Compostella in Northern Spain and most recently trekked from Shivalaya to Namche Bazar in the footsteps of Hillary and Tenzing Norgay, covering 115km and ascending the height of Everest. My daughters were 10 and 12 when we went to Nepal.

How did you plan and achieve these trips?

Once I’d worked out what expeditions would work with the children, it was fairly straightforward. My company pays for the airfare if I’m working, and food and board is much cheaper overseas than at home in the UK, so it often works out cheaper in the summer than if we had stayed at home. My husband works full time in the UK, so when I went to Indonesia with the girls, he came out for a short period to help.

Our trip to Nepal was hard at times, I won’t lie, but I just love that sort of holiday where you are on the move. It’s easy enough to organise. You don’t have to book anything in advance, just walk until you’ve had enough then stop. There’s always a friendly teahouse owner waiting to welcome you in. Even though it was tough, the kids said it was their best holiday so far! 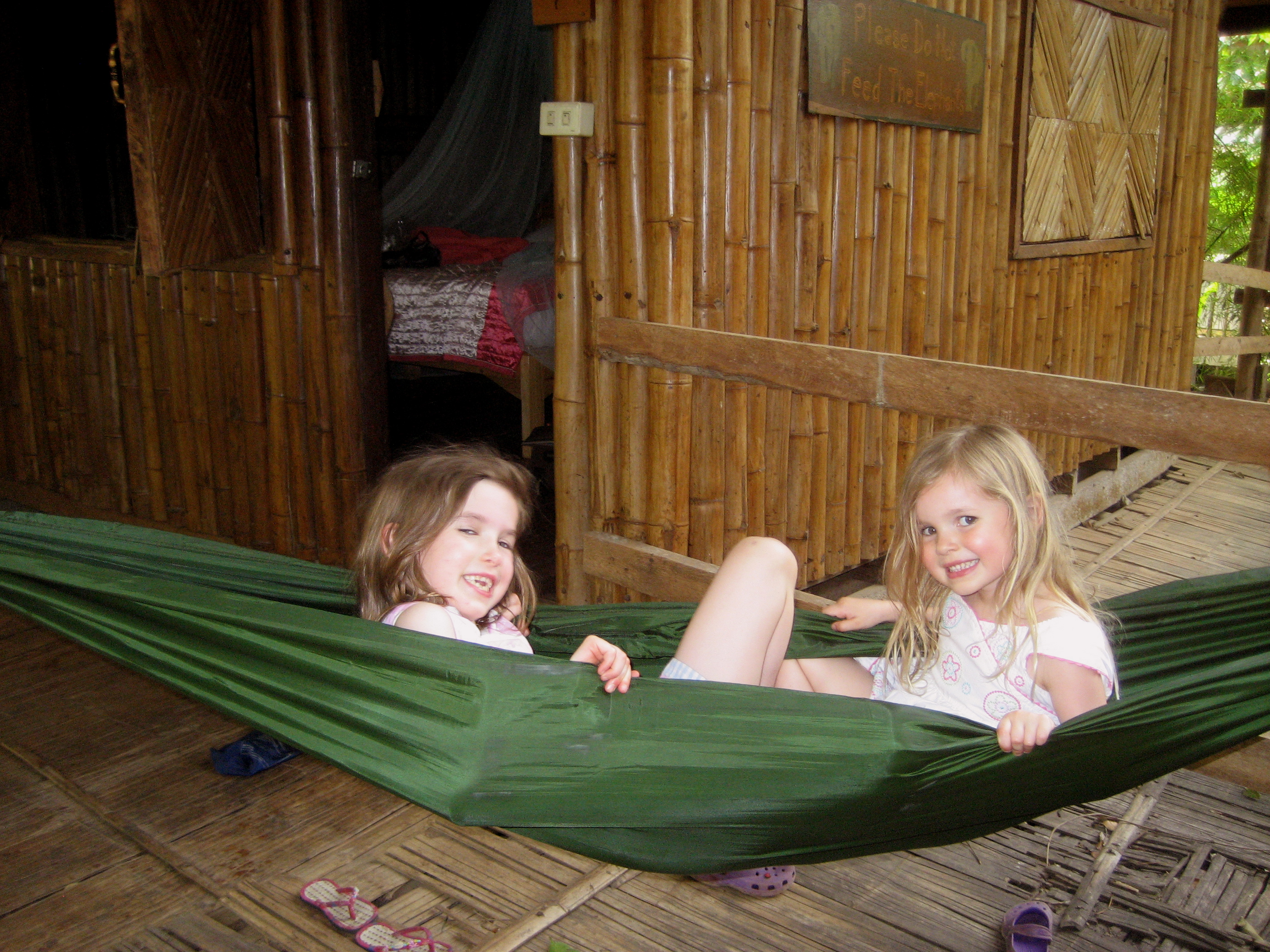 What were the biggest challenges along the way?

In Thailand both children got sick, one bad enough to take us to hospital. It was scary, but we got through it.

The juggling act of school, dealing with my eldest’s developmental issues, house, work, marriage, (aka life), and making sure that I lead at least a couple of expeditions a year is not an easy one, but it is important for me to have that balance, to be free, to be able to inspire others, to demonstrate to the other mums at school that you can break the mould, to teach my children that the world is a huge but accessible place, and that each environment has it’s own challenges, and it’s own beauty.

Our parents aren’t local, we don’t live in a big house, we don’t have an au pair. My eldest daughter’s learning difficulties means we can’t just leave her with anybody. All these factors were challenges that we had to work with, and made us creative in what we could achieve. The boundaries that I have channel my energy.

What did you children think?

They love it, though as they approach teenagerhood they are rebelling a little. Knowing this actually helped inspire one of my trips – The Mother & Daughter adventure in Namibia. It’s a great opportunity to bond with your daughter before they grow up.

What advice would you give others who want to have a go?

It’s easier and less daunting if you already have connections somewhere, or know a place before you go. Don’t go somewhere completely unknown. You have to feel comfortable with what you want to do. Kids will still be kids wherever you are. The tantrums will still come!

Think of things that are easy and enjoyable for them, but also for you. It has to excite you as well. For example, I chose long distance walking as the logistics are simple, and diving as kids and beaches go well together.

Seek advice from others, including me!

I lead predominantly scientific research expeditions now, and cover all manner of environmental issues in my work, which I love. But I recently had an idea to open up the expedition and adventure world to other mums who, like me, have felt trapped by the limitations of their situation, or who just don’t think they can muster up the energy to climb anything higher than the stairs at night, and whose tropical forest is enclosed in a palm house. This has now become a reality, and it’s not just for mums – all women welcome. It’s called The Matriarch Adventure – an extraordinary adventure for ordinary women! I have also just launched The Bluemoon Adventure, a coral reef conservation expedition for women in Madagascar.

To find out more about Catherine, please visit her website https://www.cathadventure.com/

The secret Isle of Wight campsite you’ll want to visit

Is Littlehampton the best sandy beach on the...

Nine reasons why Mauritius is the ultimate family-friendly...

[…] Goffart and her family biked around the world – for seven years! Travel over maternity leave Go diving in Indonesia – Catherine Edsell is another heroine of mine. She’s an expedition leader and all round […]