Family day trip to France itinerary: where to go, what not to miss

We had so much fun on our first family day trip to France. Here’s our itinerary and what we got up to. I’d thoroughly recommend staying overnight (camping!) if you can as there is so much to see and do, but a day is still plenty of time to enjoy what the Northern French coast has to offer.

Why go to France for a day trip

We decided that a family day trip to France would be a great idea for a mini adventure. On the one hand having kids means you can’t get up to mega adventures as easily, but on the other hand, it means things that may not have held as much excitement in the past suddenly become exciting challenges to undertake.

If you book early enough, go on a Sunday and shop around for the best deals, you can get a family across for £50. Bargain for a speedy holiday abroad! Obviously France is more accessible to southerners, but the principle of a ferry crossing from anywhere in the UK is the same. It’s just a bit different and out of the ordinary wherever you go, and I love exploring anywhere new. 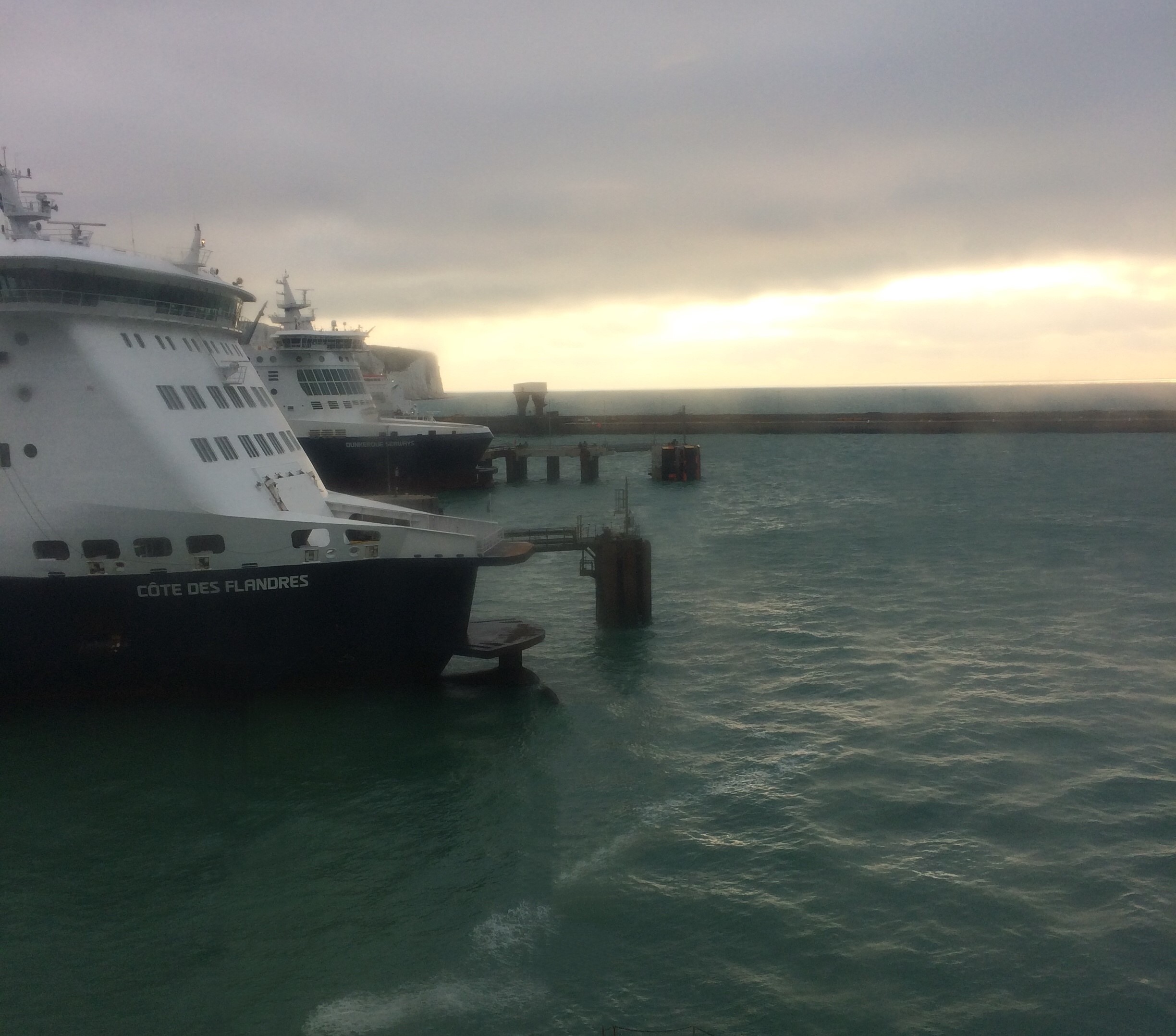 We got to Dover for an 8:30 crossing and returned at 5:30, which meant we had plenty of time to enjoy our day without rushing too much. The crossing takes 90 minutes. The crossing in itself is part of the fun, and kids love the experience. I’ve not been on a ferry for years, but they seem to offer a little more now. There’s a duty free shop (if you have any spare time ha ha), restaurants and cafes, but best of all there’s a free kid’s play area with crafts, puzzles and film showing. My two had to be peeled away from this to go up to the outside deck to watch the sea and France come into view.

Now I’m sure someone will prove me otherwise but we didn’t stay in Calais. I did quite a bit of prior research and there just isn’t that much appeal to stay there, other than the huge hypermarkets for cheap (ish) booze and cheese. Things that might cause you to stay awhile include Calais Beach and the Parc St Pierre, a sweet park in the middle of town that has a playground. There are a few war memorials, but I can’t see kids being that interested in staying long. 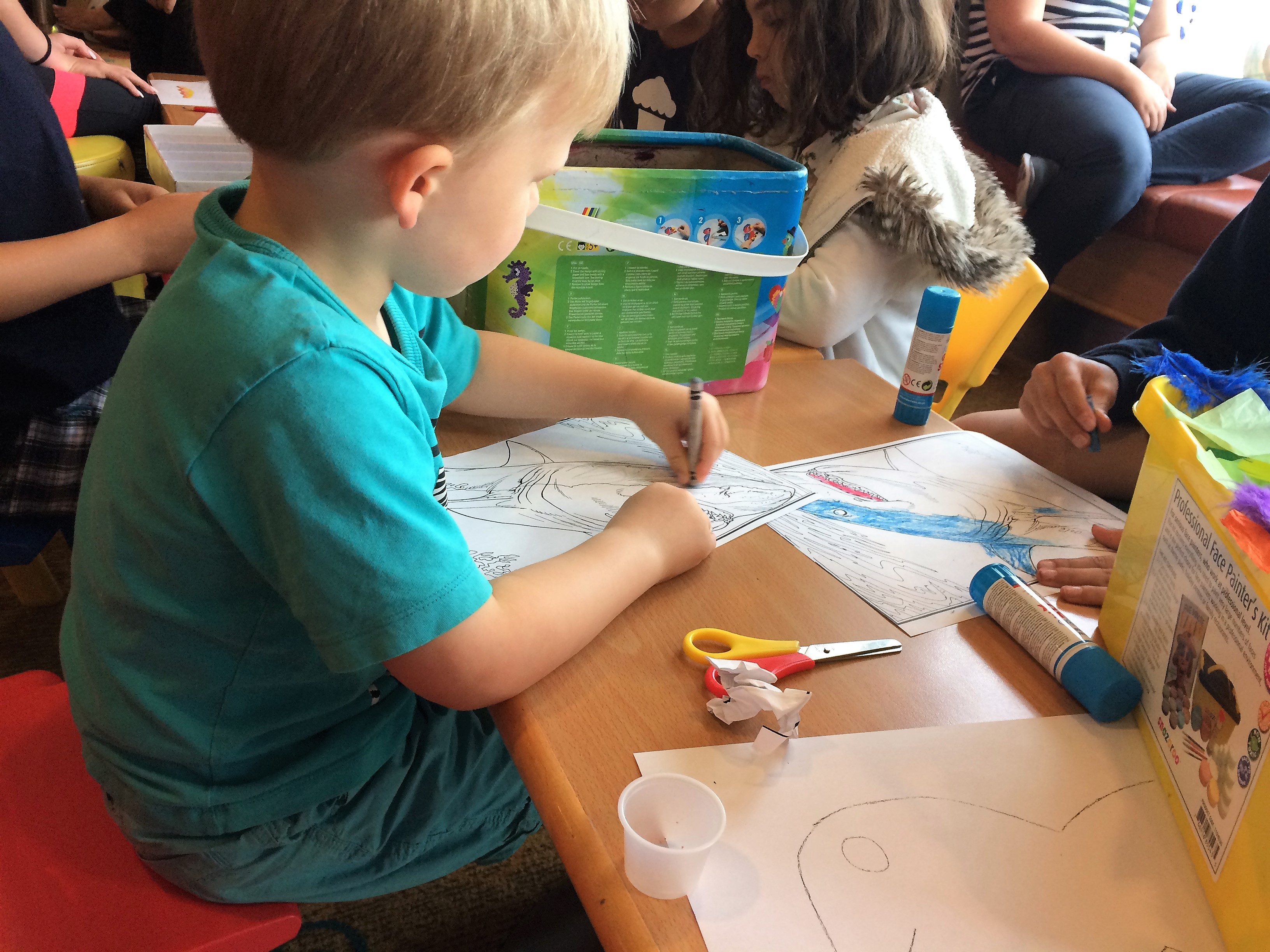 Kid’s play area on the ferry

Instead, head out of Calais to the coast road (D940) and the Opal Coast, a totally underrated beautiful and wild coastline. There’s lots of places to stop, but the best include Cap Blanc-Nez and Cap Griz-Nez. You can either just enjoy the view here (sometimes being able to see all the way back to the white cliffs, or go for a windy and invigorating walk along the Grande Randonnee (like our coastal footpath).

There are also many places to camp or stay overnight here, and I’d love to go back and do this next year. The northern coastline of France is quite different to our southern coast. It’s far less built up and busy, and has many sandy, unspoilt beaches to enjoy too and lots of rockpools to ferret around in. Just be prepared for quite a lot of wind. Kite surfers don’t come here for nothing! 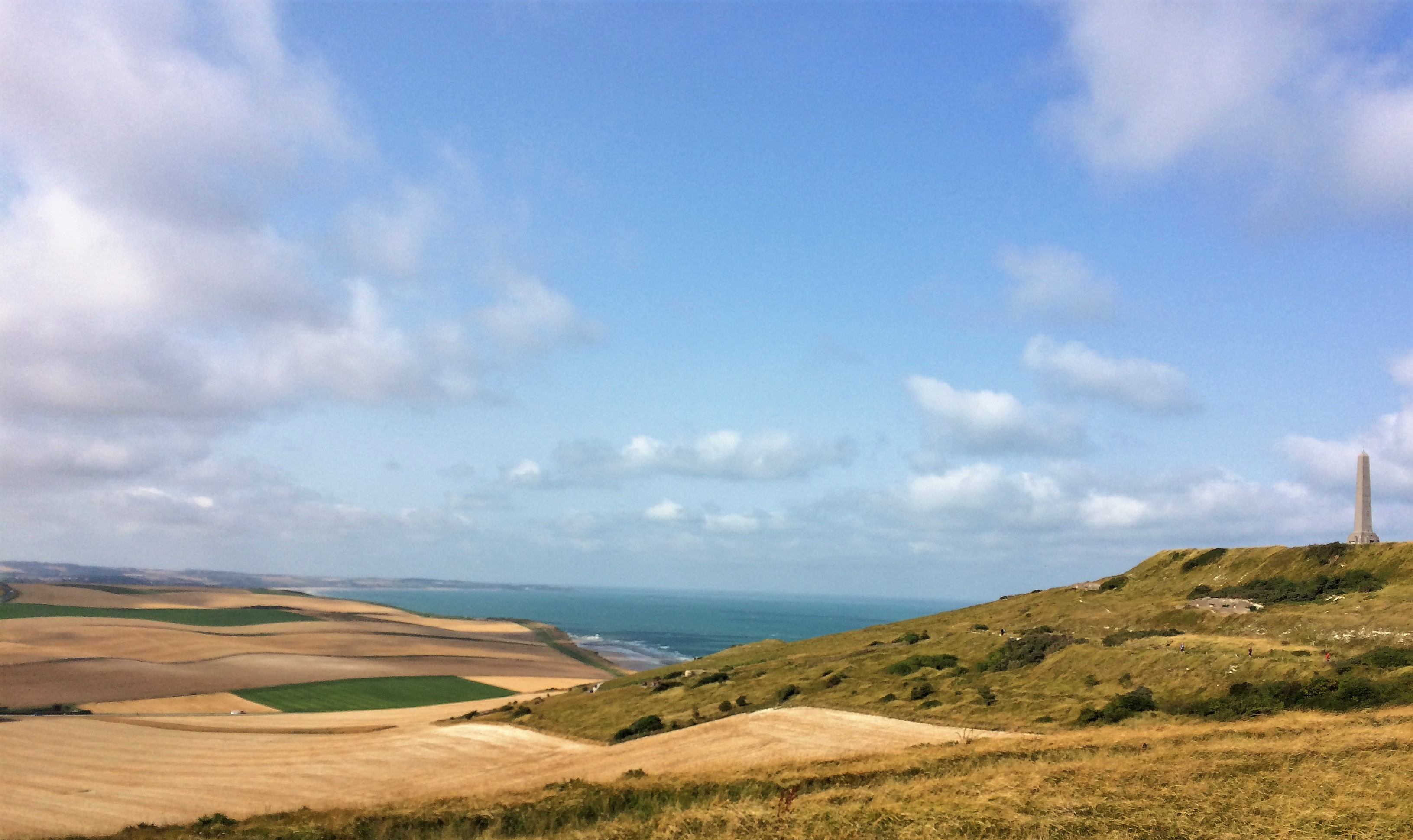 There are two war museums you can visit en route to Boulogne. The Musee du Mur de l’Atlantique is the first. It’s sited in an old German war bunker with MUSEE painted on it’s side, so you can’t miss it. It’s fairly pricey at 25 euros per family, but has good reviews, so maybe next time. We decided to cough up for the Musee 39-45 instead which was a similar price. Makes you appreciate all the free museums we have in the UK. The Musee 39-45 is further along the coast in Ambleteuse. It’s a small and sweet museum crammed full of memorabilia and outfits from WWII. There’s also a film you can watch, but we arrived at the wrong time (and also didn’t think a two and four year old would enjoy it!).

Visiting a war museum with children is a poignant and interesting experience. When your four year old asks you ‘why did we fight other people?’, and ‘why did so many people die?’ it’s pretty difficult to answer. The Musee 39-45 is open daily 10am-6pm from April to October and 7pm in July and August, on weekends and bank holidays 10am-6pm in March and November, and closed December to February. 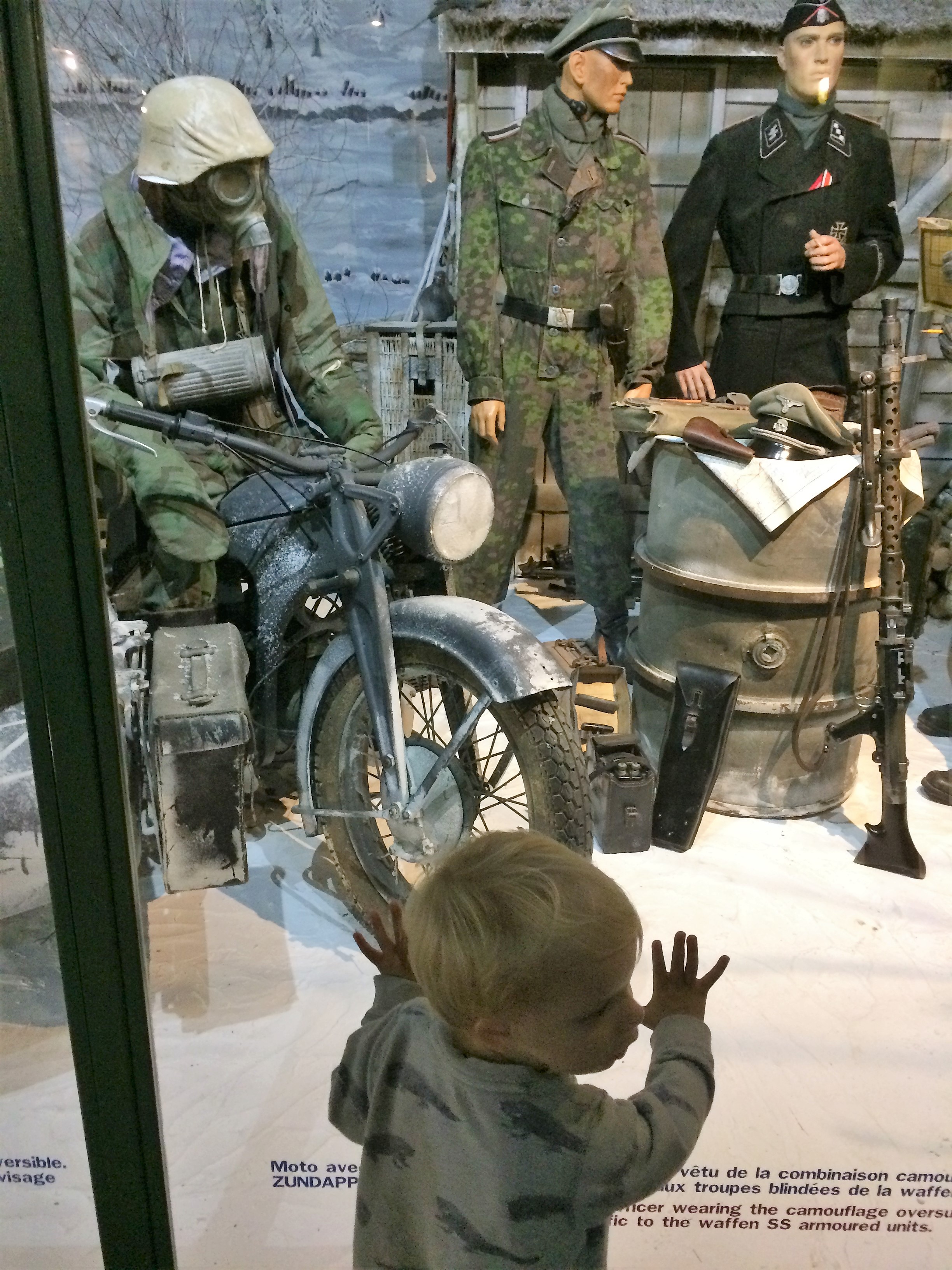 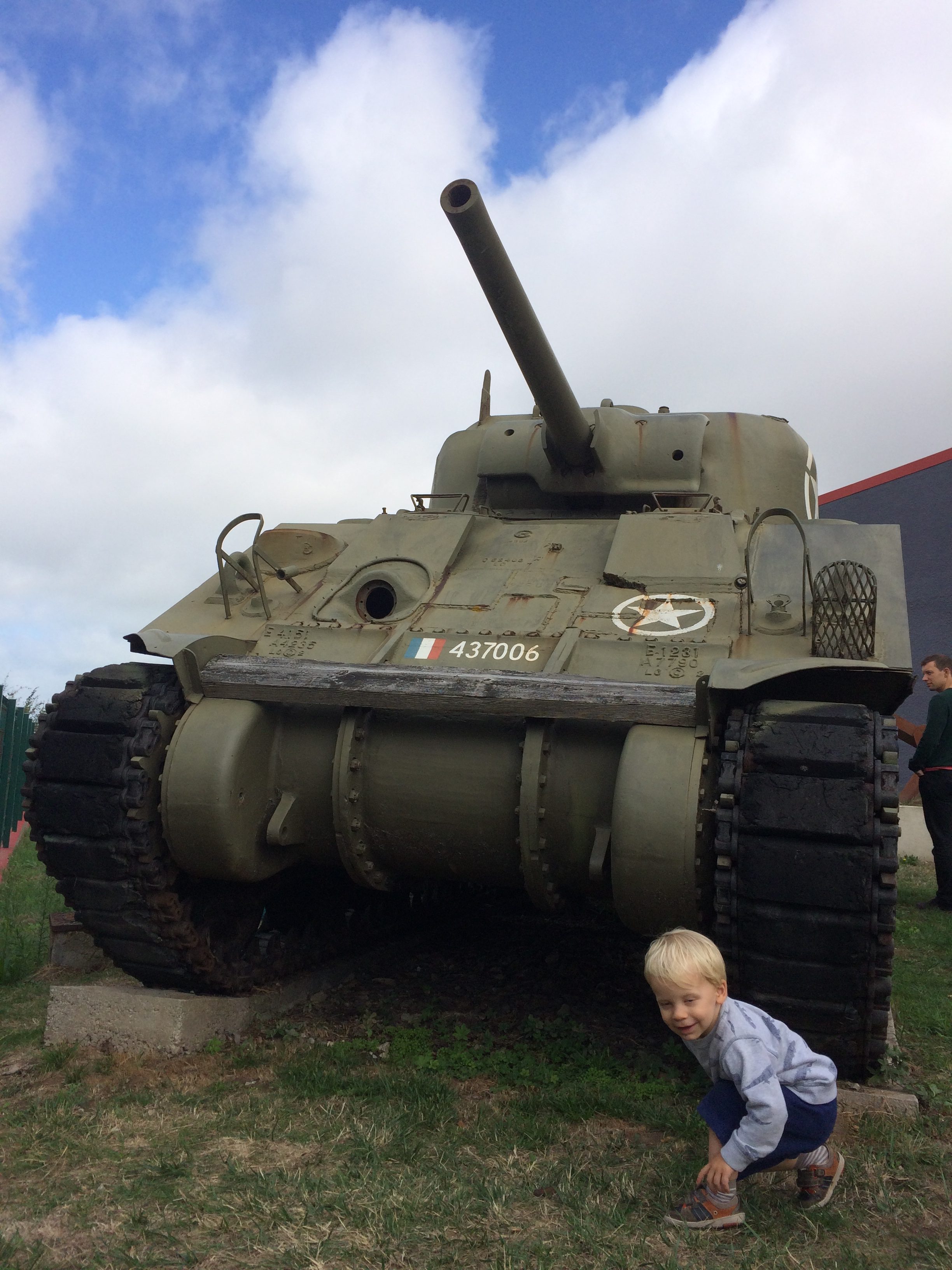 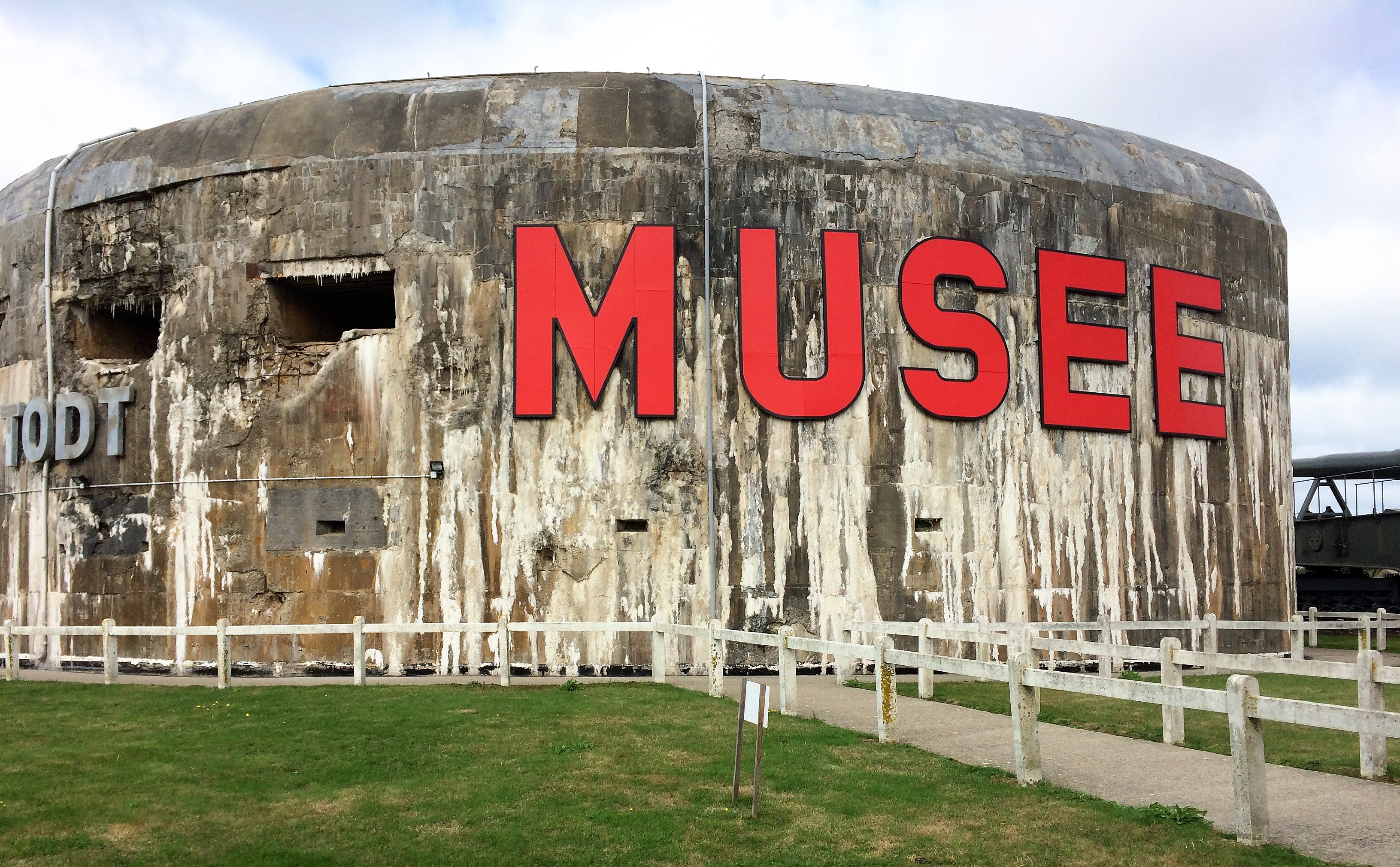 Stop for lunch at Wimereux. It’s a lovely little town with loads of cafes and restaurants to fill up on frites and crepes! The town also has an amazing sandy beach with sand dunes and lots of kite surfers and a car-free promenade. We visited on Sunday and it was very busy, though we managed to park okay in the northern car park (free too). 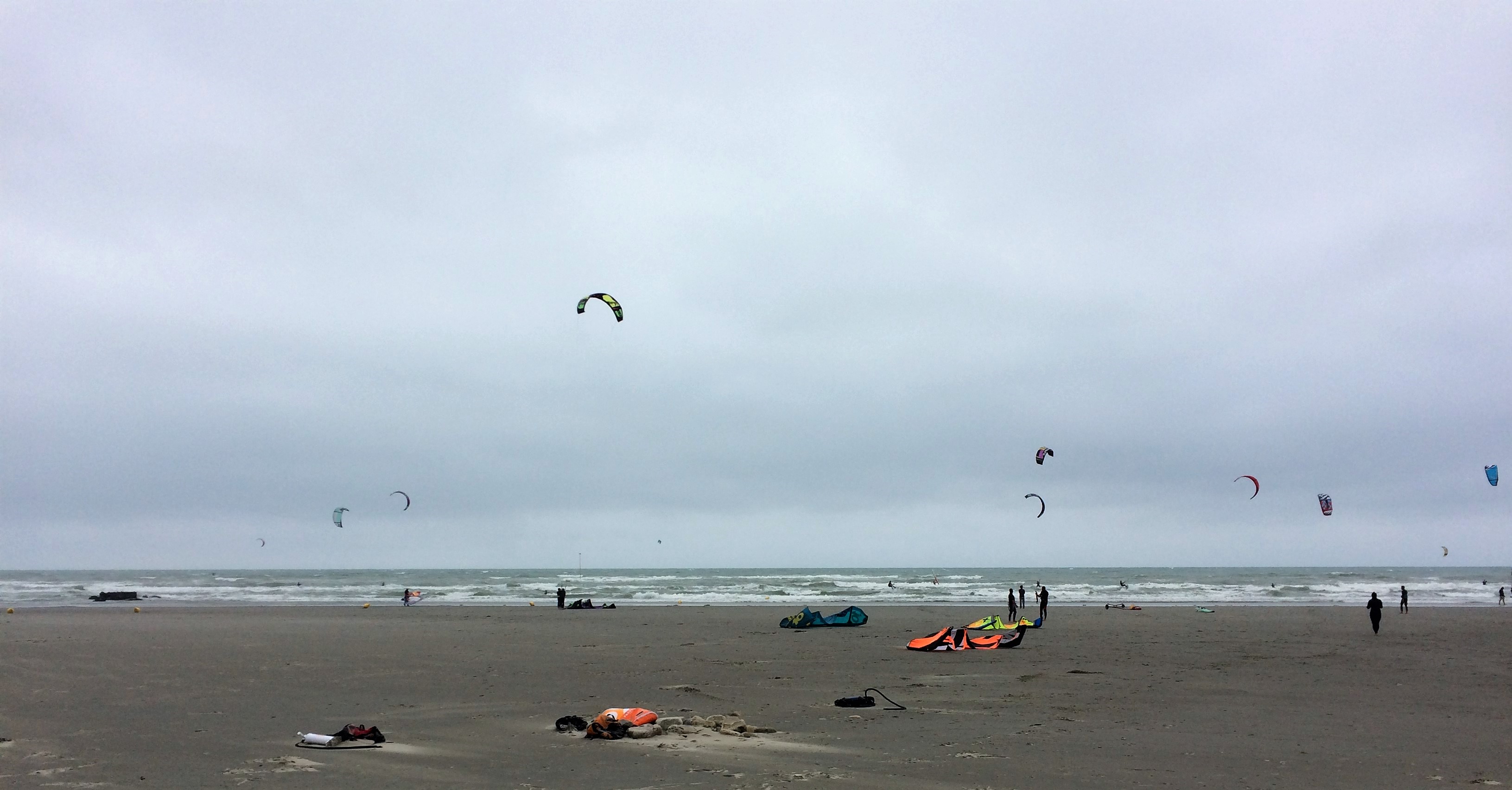 Boulogne-sur-Mer – Aquarium and the Old Town

After lunch head onto Boulogne, which is only a hop and skip from Wimereux. The main attraction here is the Nausicaa Aquarium – the largest aquarium in Europe. Unfortunately I can’t give you a rundown of the aquarium as we decided to chill out and explore the old town instead, but it does look amazing, and I’d definitely want to go back if we stay overnight one time.

For info, it’s open daily 9:30am-8pm July and August, and until 6:30pm otherwise. It closes from 7th January for three weeks. The aquarium does get busy so either get there early, or visit late (a bit difficult for day trippers really). There is a car park opposite the aquarium to park in. It’s pricey at 25.90 euros for adults and 19.50 euros for children over four hence the need to not rush it. Globalmouse has written a great post on the aquarium too.

As we were a family of three generations we decided to take it easy and head for the old town for some cafe and pain au chocolat instead. Boulogne was very quiet on Sunday, though I imagine it does get hectic on other days. It’s much bigger than I expected too. The old town is very pretty, with 13th century belfry, ramparts and city walls plus a number of art galleries, exhibits, cafes and shops to enjoy. There are also plenty of flea markets and brocantes to dig around in, in and around Boulogne, if you can persuade your kids to get into this. I love digging around for treasures but often have to do it in a rush now I’ve got the littleys!

There is also a beach at Boulogne, but I’d recommend one of the smaller, easier to park at, other beaches along the coast. And if you travel a little further down, you come to Hardelot, which is full of pretty pastel beach huts, sand dunes and woodland. Gorgeous.

Late afternoon we drove back up the faster A16 to Calais (about 30 minutes journey) to dock back onto our ferry home. Au Revoir Boulogne! We had a fab family day trip to France. 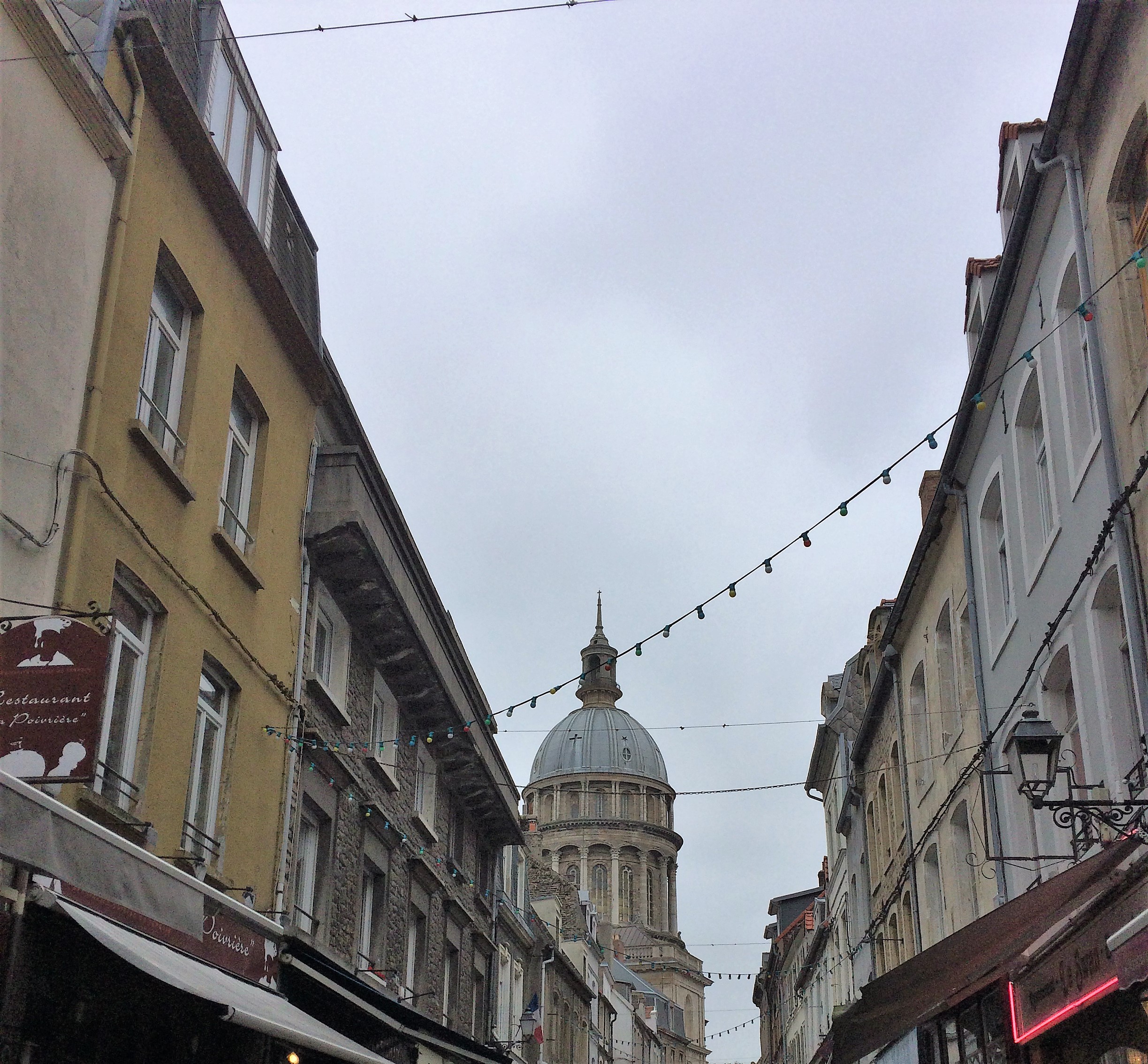 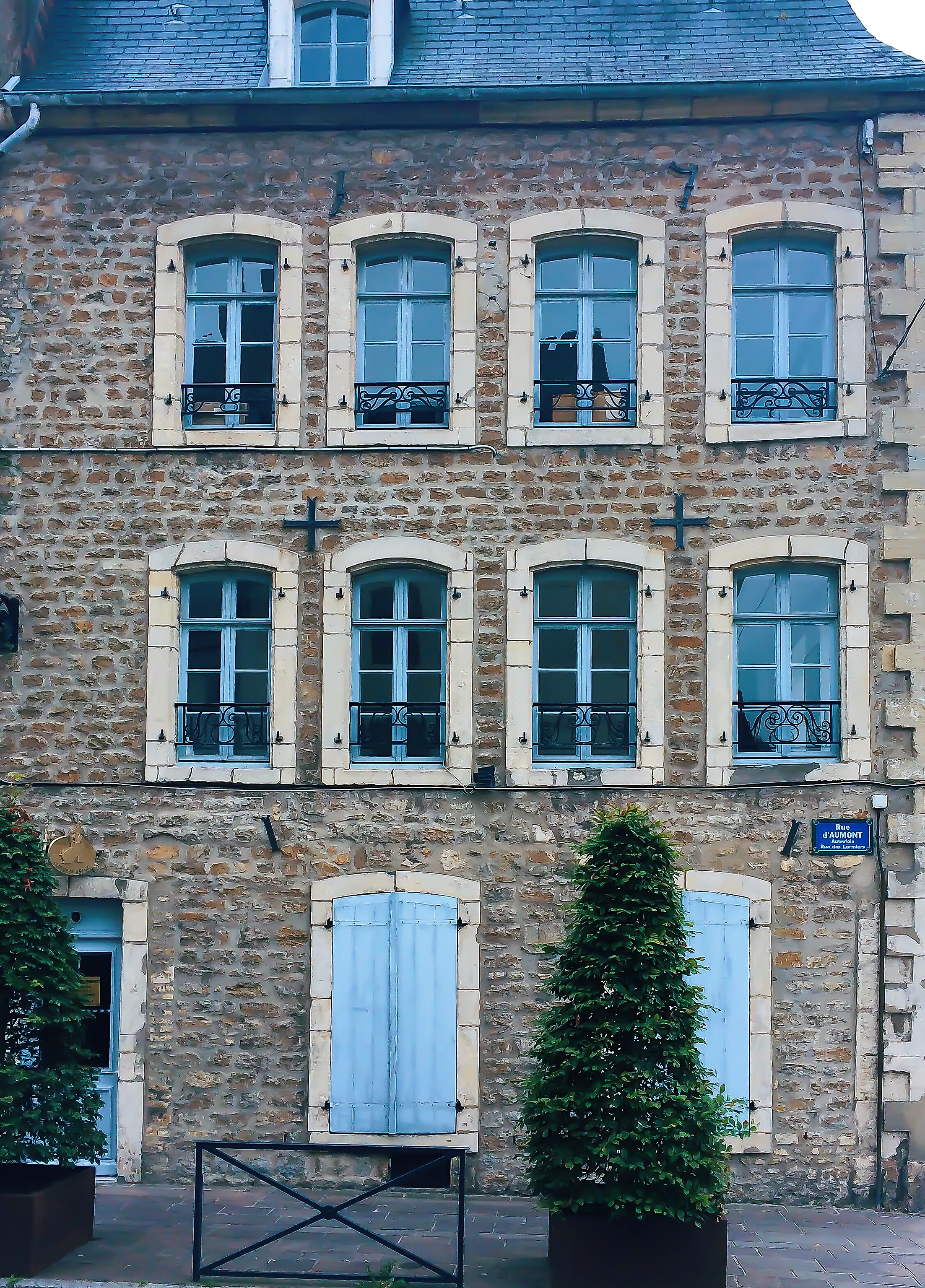 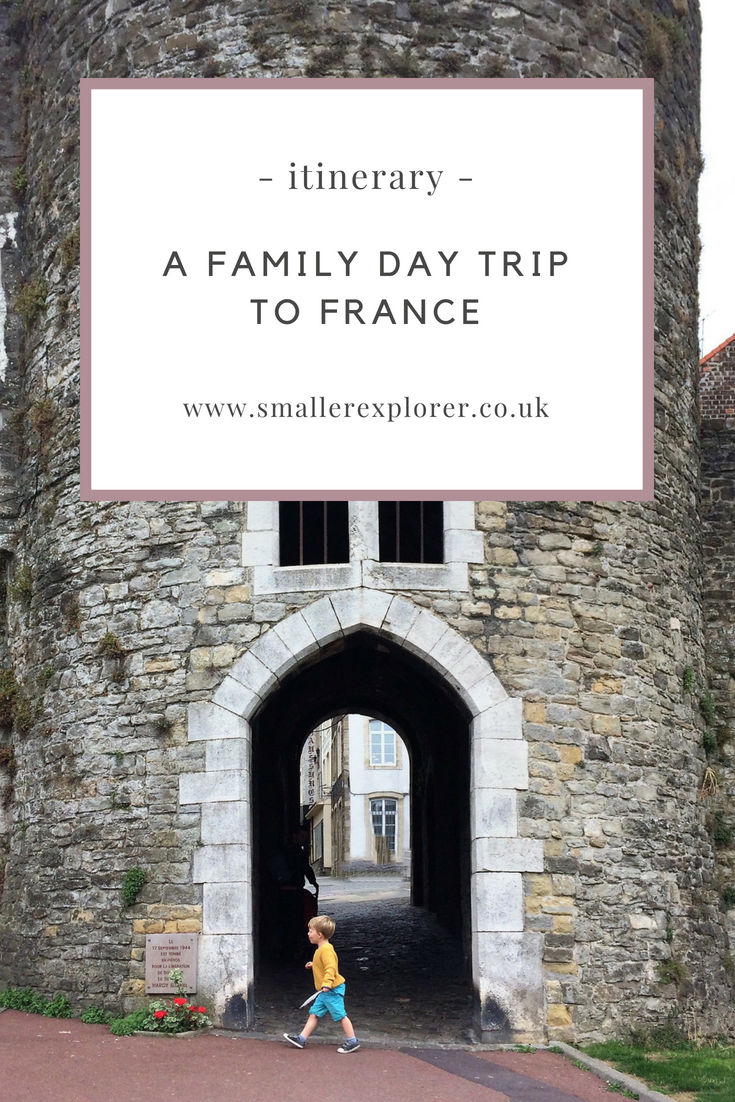 Why I travel and love adventure

Get outside: How I ran a marathon after...

Oh wow, you packed a lot in!! I agree that it is a great mini-adventure for families.
We have done many a day trip (*cough* booze cruise!) and have always gone for lunch at Cap Gris Nez and an invigorating walk along the costal path. It’s lovely!
Thanks for linking up to #MondayEscapes

Thanks for having us. Yes it’s beautiful. I didn’t realise but the supermarches are not open on Sundays – doh! So no booze for us.

What a wonderful idea visiting France on a day trip. The kids love ferry travel don’t they?! I LOVE a beach so I would be straight to Wimereux to watch the kite surfers. Thanks for linking up to Monday Escapes!

Wimereux is a fab beach x

[…] Take a ferry trip to Europe – we recently went by ferry to Northern France and loved it. […]

We used to go to France all the time when we lived in Wimbledon, fun and easy day out and a chance to stock up on cheap champagne! Well done for getting out and about with small children and taking us with you on your adventure with #farawayfiles

So amazing that you can take a ferry day trip to France! Wish that it were that easy from Denmark! I love a coastal walk and little town to explore. Toss in some tasty French food? Sold! Thanks for sharing with #FarawayFiles.

[…] For an adventurous rail trip, we may pick one of these exciting cities and visit for a few days. Totally love the idea of travelling some where other than aeroplane, and train seems a great idea with young kids (other than the ferry which I think is the best form of transport with children). […]