Blackheath has a range of boutique shops plus some independent cafes and restaurants. We liked Gail’s Bakery for a pitstop. The train station is right in the village and Blackheath itself is on the doorstep. There is no tube in Blackheath village. Greenwich is much busier and touristy than Blackheath, and there is more there. Lots of mainstream restaurants including Bill’s and Pizza Express plus independent eateries too. Greenwich Market is worth a visit. It’s like a small version of Spitalfields in East London, and probably more manageable with kids too. Greenwich also has lots of antique markets and boot fairs going on so if you like bric-a-brac rummaging, you should find some goodies here. Greenwich train station and DLR sits a little to the outside of the centre (5 min walk). Cutty Sark DLR is located in central Greenwich and right on the Thames, by the Cutty Sark funny enough! Again, no tube. The nearest tube is in North Greenwich next to the O2 (Jubilee Line).

Blackheath is fairly vast but cut up with fairly busy roads running through it. It’s a great spot for kiteflying or playing football. There was also a kids’ fairground on the heath when we visited, which took up too much of our time (and money!). Greenwich Park is much better for kids though really. It’s contained and traffic free. It’s also very varied, unlike the flat Blackheath. There’s deer up in ‘The Wilderness’, The Royal Observatory in central Greenwich Park, plus Ranger’s House, Queens House and Maritime Museum too on the borders. The playground at the bottom was a hit with my kids and the views are amazing. 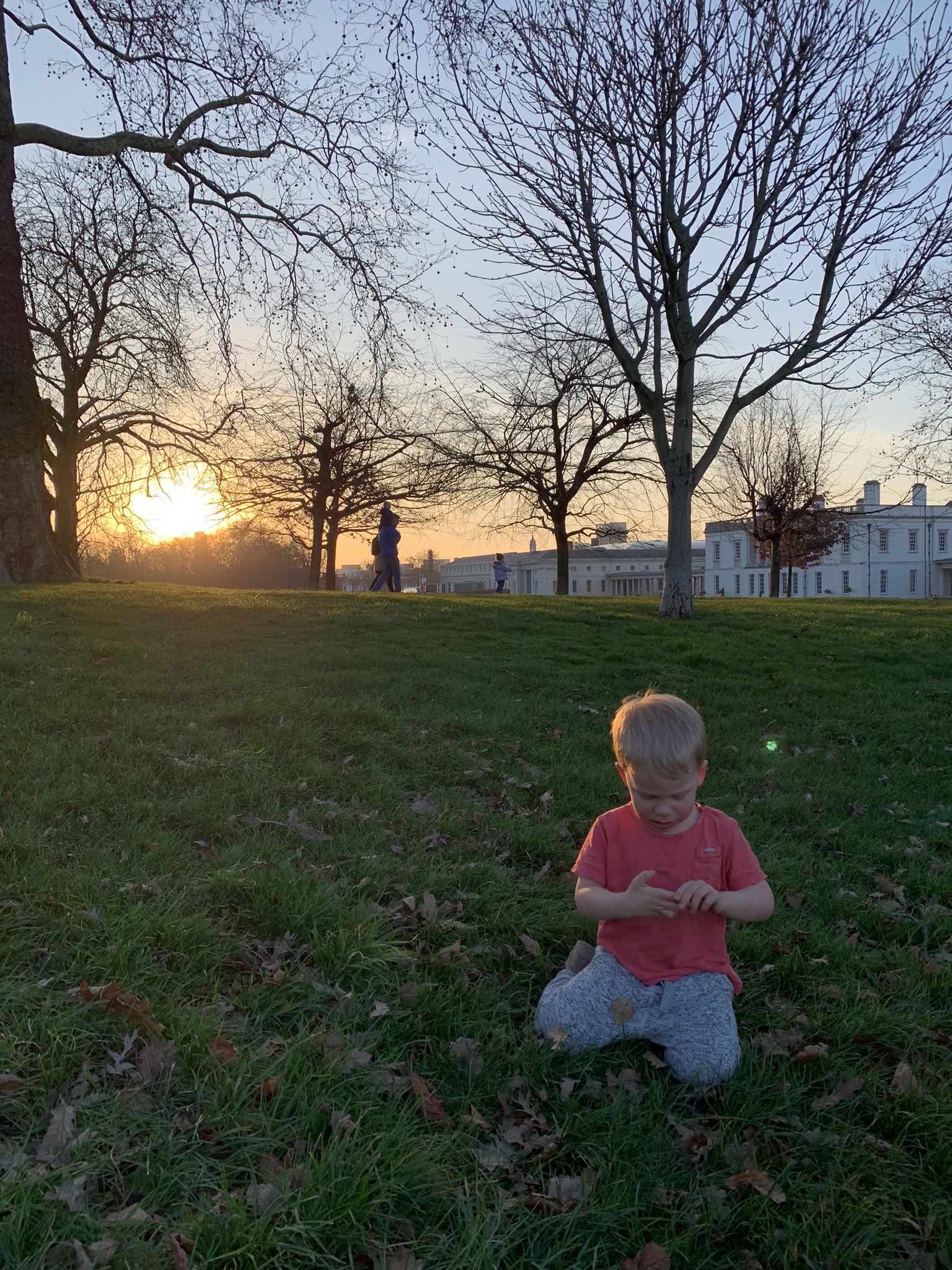 Sunset over the Maritime Museum and Greenwich Park

Travel on the DLR

An underrated London attraction is its transport. I think my boys’ favourite part of the week was travelling on the top of a double decker bus (or double echo bus as my two year old sweetly said) looking at all the sights, or at the front (or back) of the DLR (docklands light railway) aka the train with no driver. We had great fun pretending we were driving the train, and because the DLR is part over and part underground, there’s a bit of excitement when you in and out of tunnels. Double decker buses can be caught all over London, but the DLR runs mainly in the southeast connecting southeast London to the city.

The Museum of London Docklands

Also connected by the DLR is the amazing Museum of London Docklands. This is such a lovely museum and well worth the trip. First, it’s location is super kid-friendly as it’s on West India Quays which is a pedestrianised area, with lots of cafes and restaurants and no cars. I always liken the Canary Wharf region to Singapore. It’s very clean and slightly sterile in it’s new and imposing way, but really very pretty and makes for a great walk along all the old waterways of the docks.

The Museum of London Docklands is set in one of the old warehouses, and is deceptively large. I guess because of it’s slightly obscure location it doesn’t get too busy, which was good news for us. It has 3 floors to explore, and is choc a bloc full of exciting things for all ages to look at and learn about. There’s always extra family events going on too, plus the ‘Mudlarks’ play area, which is free but ticketed to ensure it doesn’t get too busy. The cafe is quite open plan and spacious too. 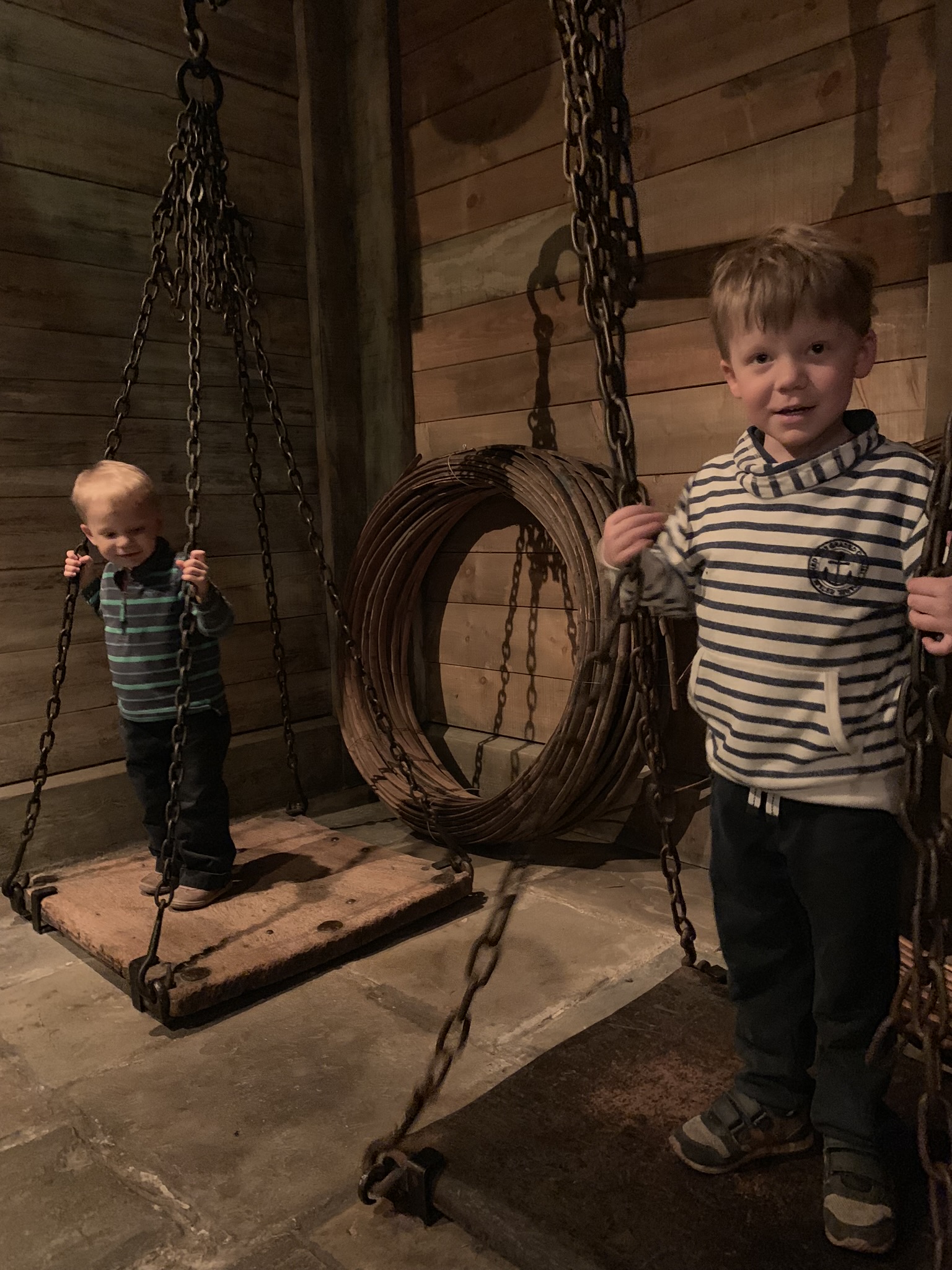 Weighing scales at the Museum of London Docklands

No visit to Greenwich is complete without a visit to the Maritime Museum. It’s free to enter, and has a vast amount for all to learn about. It’s fab for kids, with two areas specifically designed with children in mind. The ‘Ahoy! Gallery’ is for younger visitors of 0-7 and the ‘Sea Things’ interactive gallery for older kids. I especially like the cafe on the first floor by the world map on the floor. You can let your kids run around the globe while you sit down and chill for a bit. The Maritime Museum is easily accessible from Maze Hill, Cutty Sark or Greenwich station. Parking is available but expensive.

The Royal Observatory sits in the middle of Greenwich Park. We didn’t pay to go into the Observatory this time, though it is worth it to stand on the Meridian Line and see the Observatory up close. Instead, we headed to the Planetarium for a spacetacular show which both boys loved (they are 2 and 5). Admittedly our 2 year old did start chatting midway through but he was generally entertained by it all! Our older son loved it, and is now fascinated by all things planet (Jupiter is the favourite at the moment). Even just heading up to the Observatory for the view over Canary Wharf and the city is a joy in itself. Head there from Maze Hill, Greenwich or Cutty Sark stations.

We all loved it at The Cutty Sark. There is so much to see and do. We were lucky and visited on a day which wasn’t too busy but had a family event running, which absorbed my kids for a good hour. The ship itself is magical to explore around and will take at least another hour or more. You can head under the galleys or up high on the deck. It’s a really enjoyable and immersive experience for all. The Cutty Sark DLR is the nearest station.

Emirates Air Line is quite pricey but is lots of fun and is a bit novel too. It runs from North Greenwich over to the Royal Docks, and takes in plenty of sights over the old docklands, East London and the city. We just parked in North Greenwich near the O2 and took a return trip before grabbing some lunch at the O2. Each journey takes around 10 minutes. But you could easily stop off and wander round the other end for a while. 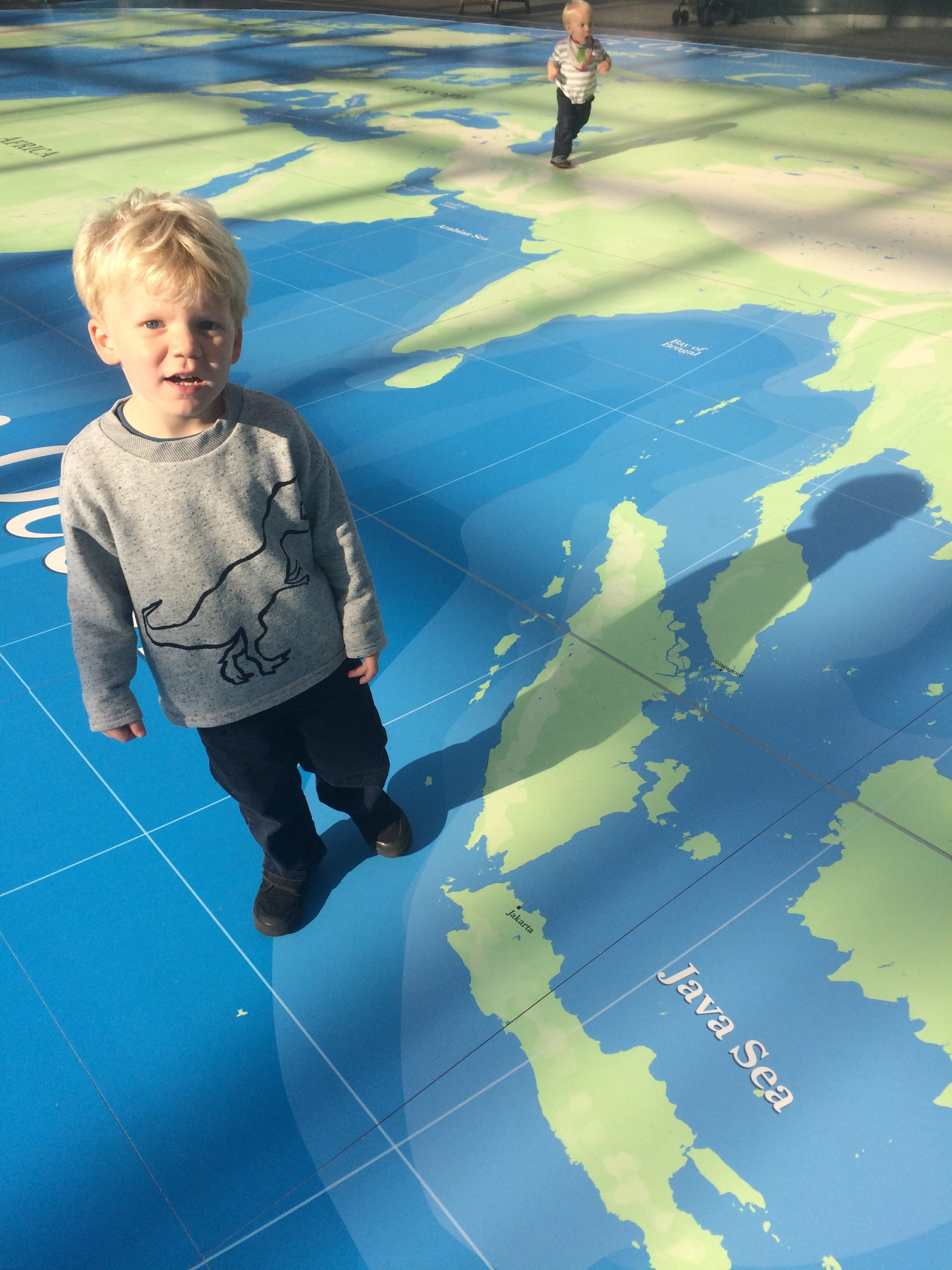 Scaling the world at the Maritime Museum

There’s a heap of playgrounds in the Greenwich region. We stopped by two of them; Manor House Gardens and Greenwich Park. Manor House Gardens is in Hither Green, just outside Blackheath. The library is conveniently next door, and often has events on. The gardens consist of a lovely duck pond and boardwalk, plus large grassy area, playground and cafe. The playground is a good one for all ages, and isn’t too large that you have a heart attack every time one disappears out of sight! We parked just outside, though it was tricky finding a spot and you do have to pay.

Greenwich Park playground is huge, and gets very busy. I didn’t like it much, but perhaps it was because I was on my own with my two young kids at the time! It is ideal for older kids, and its location is amazing, right at the bottom of the park next to the Navel College and Maritime Museum. The nearest train station is Maze Hill, not Greenwich.

We started off driving out to Oxleas Woods, as I was intrigued by it since writing up about the best walks in London. Oxleas Woods is on the Green Chain walk. It forms some of the last remaining areas of ancient deciduous woodland in southeast London (some parts are over 8000 years old!). It’s quite a small 73 hectares and you never quite get away from the low hum of the A2 in the background, but it’s a nice enough wood for a stroll. There’s a free car park on site, plus cafe and outdoor gym (no playground). Nearby is Severndroon Castle, though it’s only open on Sundays, and Charlton House. I didn’t stop at Charlton House as I didn’t think it was that suitable for littleys. They do often run events for families but there wasn’t much this half term unfortunately.

Urban city farm Mudchute Farm was next on our list. This little 32 acre idyll sits just north of the Thames and south of Canary Wharf. It’s accessible by DLR. It’s a really lovely little spot, and it feels much more rural than it is. The towers of Canary Wharf seem really striking against the farm landscape! Mudchute Farm is free to get in too, though donations are welcomed. There’s a cafe and toilets, stables with horseriding, small animals to pet plus a small trail around the fields to see the larger cows, horses, donkeys and sheep. The farm also often puts on family events too. At a pinch you could walk here from Greenwich under the foot tunnel and through Island Gardens to Mudchute, though it would be a good hour or so stroll. 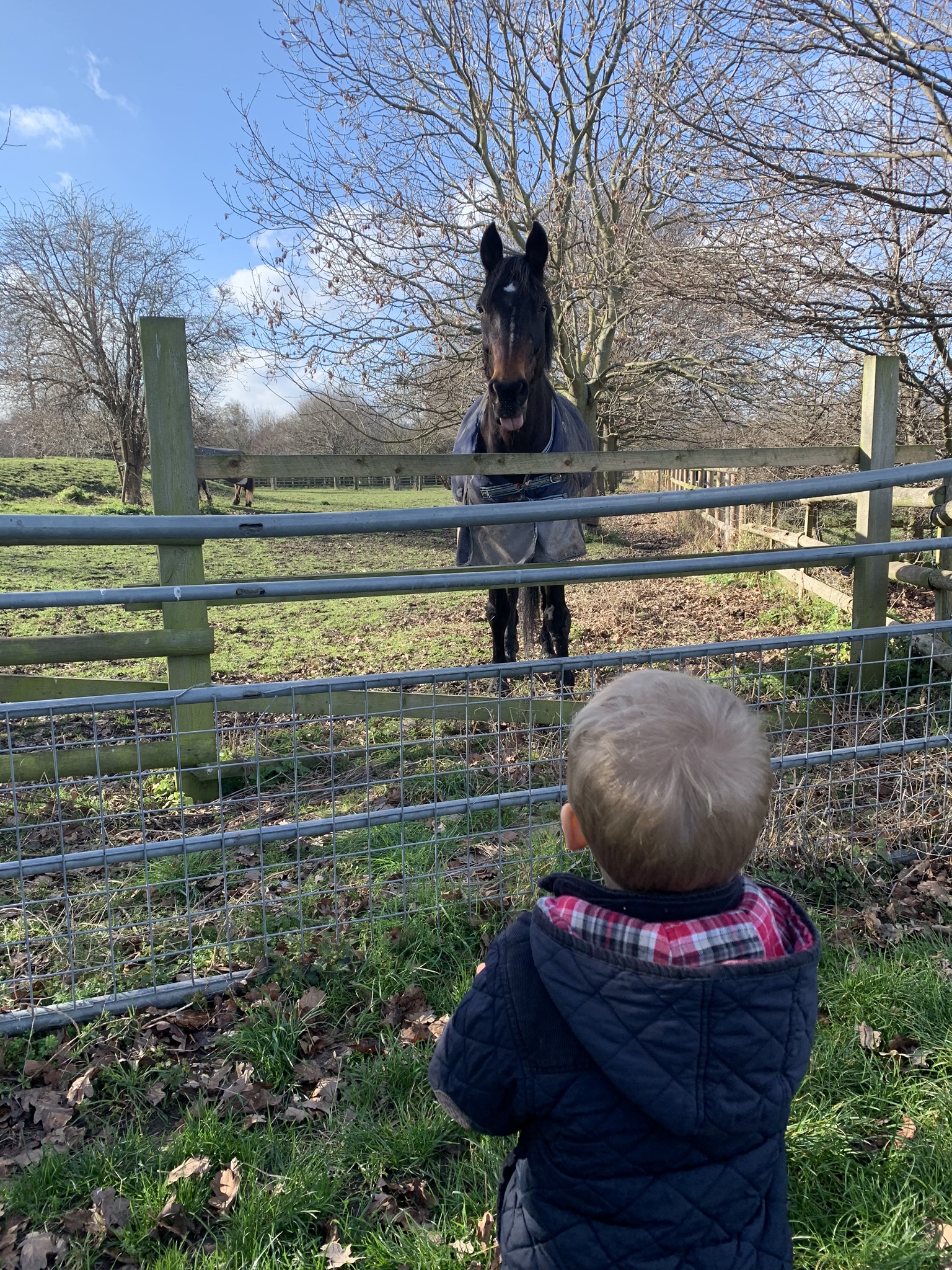 Other things to do in Greenwich and Blackheath

We sadly ran out of time for these other bookmarked things, but there is also: 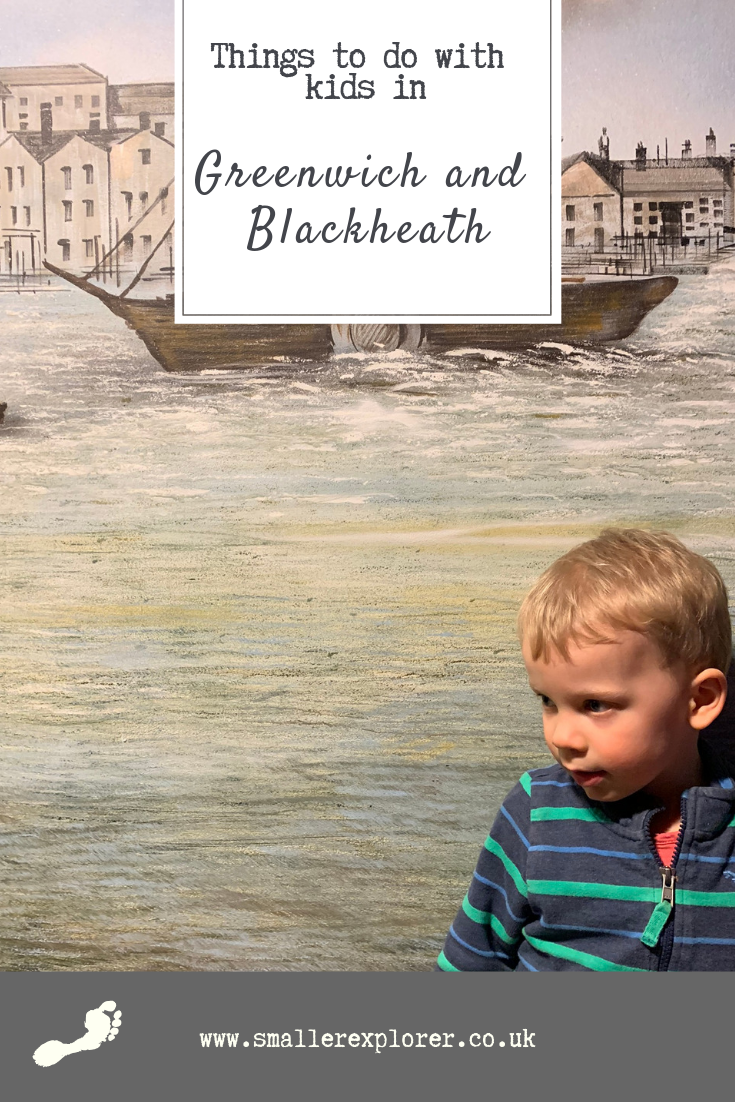